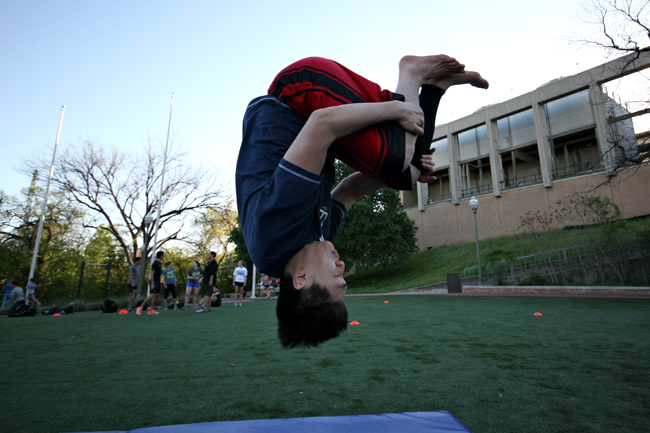 Some people like to break-dance. Others practice martial arts. Texas Tricking members practice both — at the same time.

Tricking, a new kind of sport that combines dance with capoeira, muay-thai and other styles of fighting, is growing increasingly popular across the country. Management information systems junior Joseph Oh is the president of Texas Tricking, a campus organization that focuses on teaching students a fusion of martial arts techniques. Last semester, Oh created the club in hopes of finding other “trickers.”

Oh’s interest in tricking began nearly seven years ago, when he first saw a tricker on television. In 2009, a group named Quest Crew won America’s Best Dance Crew, and Oh, watching at home, was captivated.

“Steve Terada is the main tricker of the group; I got really interested because he did crazy flips and kicks,” Oh said.

Oh eventually founded Texas Tricking with brothers Kevin and Justin Park. Since its founding, the organization has grown from three to 15 members who meet on campus four times a week for practice. Members leap across the floor and fly into the air, all while listening to adrenaline-pumping music punctuated by the occasional loud thump of someone falling onto the mat. Oh said trickers mix breakdancing power moves and high kicks and fast spins from taekwondo or muay-thai, pushing themselves to reach their fullest potential.

Tricking follows no beat or rhythm, and athletes move at their own pace. Each person’s individual style can be incorporated into their tricking technique. Oh said Texas Tricking serves as a place where people of all backgrounds and skill levels convene to improve their abilities.

Now that the group is larger, they are considering participating in competitions, Oh said. For now, members focus on spreading the word.

Most of the movements in tricking require a considerable amount of physical strength and stamina. Although fear of injury deters many people from trying out the new sport, so far, those concerns haven’t stopped UT trickers from pursuing their passion.

Amateur martial artist Joshua McCoy, who said he discovered Texas Tricking by searching online, said anyone is welcome to join the organization to develop their skills.

“It’s hard, but it’s not as hard as it looks,” McCoy said. “It’s a matter of getting out there and trying, like doing a backflip into a pool when you’re a kid.”

Justin Huynh, biochemistry freshman and Texas Tricking historian, stumbled upon the sport while sifting through martial arts YouTube videos. Huynh said locating a community of trickers took him a while.

“I joined the group because I want to be near more trickers,” Huynh said. “I only started in my backyard by myself, and I’m always hurting myself. It’s not the best place to train. Recently, I’ve found more trickers around the area, and we’ve been asking for training sessions with them.”

Huynh pushed the organization to network with other trickers in San Marcos, Dallas and Houston. He hopes to continue sharing his passion for the sport. Although they risk getting hurt, Huynh, McCoy and Oh said they plan to continue exploring this branch of martial arts because the rush of energy and adrenaline are addictive.

“I just like to be in the air — it makes you feel like you’re flying,” Huynh said. “I have a favorite superhero, I’m a Superman fan, so that makes the feeling of flying awesome.”