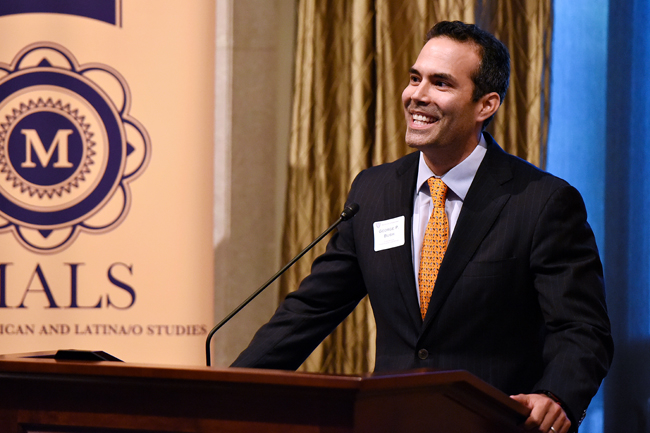 “We went through a series of 15 nominees, and we evaluated them for leadership, public service and areas like that,” Guidotti-Hernández said. “With him as the first Latino land commissioner, I think in its [179-year] history of the office, we thought it was an appropriate acknowledgement of what it means to be a trailblazer in Latino leadership today.”

As a son of a Mexican-American mother and as a Hispanic man who grew up in the U.S., Bush said he was honored to receive the award.

“Going to this University, being honored for the first time, it’s truly a honor and privilege,” Bush said. “It’s truly a challenge to take things to the next level, to give a hand to the next generation of students looking at opportunities whether its public service or grad school or finding opportunities that can improve their life. [There is] a lot of work ahead.”

Bush said he wants his agency to help both the center and the department.

“They’re doing research that I think is going to benefit our agency,” Bush said. “In terms of projecting the big needs facing the community, they mentioned health care, immigration, voter ID and so forth, which is helpful to our agency.”

While Bush accepted the award, approximately 15 protesters in the West Mall came to express their dissatisfaction at Bush receiving this award, as well as with his political track record.

Feminist activist Martha Cotera speaks in front of the tower in protest of the decision to grant Land Commissioner George P. Bush the inaugural Latino Leadership Award Monday evening. Cotera and other protestors cited Bush's political record on issues ranging from immigration to fracking and environmental concerns as reasons why he should not have been selected for the award. Carlo Nasisse | Daily Texan Staff

According to Daniel Yanez, an Austin community organizer, Bush appears to care about issues facing the Latino community, but he hasn’t done anything actually benefitting that group.

“As a politician, he has never come out for Hispanic or Latino or Mexican-American issues,” Yanez said. “To give him an award, particularly of this type — I have to laugh.”

Protesters addressed several of the issues Bush said he wishes to improve. Students gathered around to listen to feminist activist Martha Cotera, who took a strong stance against most of Bush’s political policies, ranging from immigration to fracking and environmental concerns.

“It’s difficult for students and faculty and staff to get involved in actions like this,” Cotera said. “We do not know how this honor came about. We are concerned that the values that this person has publicly talked about and in the Republican platform that he supports are anti-civil rights, anti-poor, anti-women.”