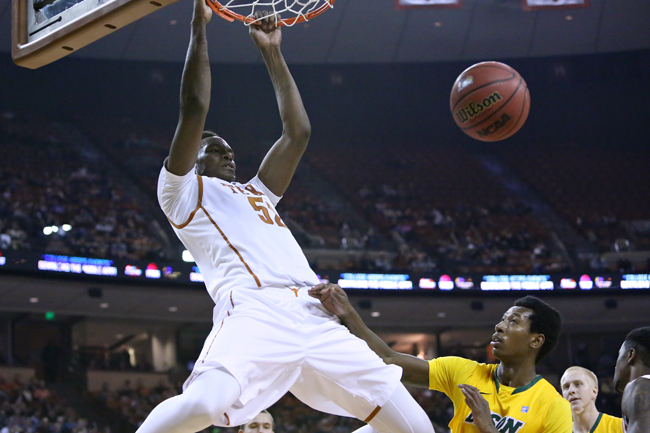 Texas freshman forward Myles Turner announced early Monday through Twitter and a YouTube video that he will be entering his name in the 2015 NBA Draft.

“My name is Myles Turner, UT alum, and I’ve decided to forgo my education and enter my name into the 2015 NBA draft,” Turner said in the video.

Turner, who was as a one-and-done candidate as soon as he put on his burnt orange bucket hat and committed to the University of Texas last spring, is a projected lottery pick.

“It’s really hard to say goodbye, but this is a decision I had to make,” Turner said. “I will forever be indebted to the Longhorns fans and the University of Texas.”

Turner, who came to Texas as a five-star prospect, never quite lived up to the expectations placed on him so early in his career, despite earning Big 12 Freshman of the Year and finding a spot on the All-Big 12 third team.

He averaged 10.1 points and 6.5 rebounds per game in just 22.2 minutes per game, with most of his big games coming against weaker competition, such as St. Francis and Lipscomb, in which he scored 25 and 26, respectively.

Turner led the Big 12 in blocks, and he was consistent throughout the season with his quick, face-up, high-release jumper from the post.

“I love the University, love the atmosphere here,” Turner said in the video. “Great education, great people, great basketball program and facilities — given everything I need to succeed.”