Texas looks for strong start in matchup against Houston 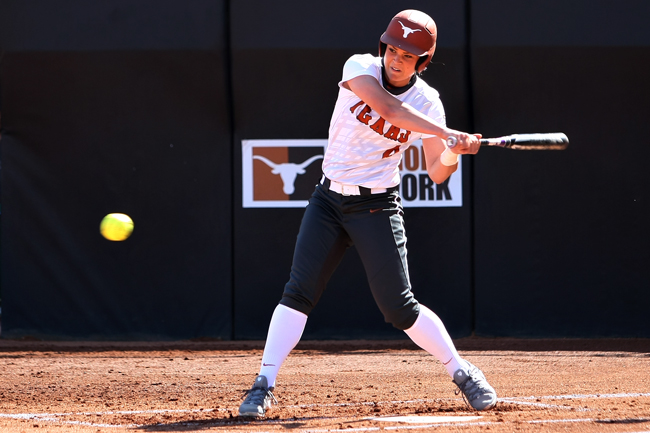 Coming off of a sweep of No. 22 Kansas to open conference play, Texas looks to continue its momentum Wednesday against Houston at Cougar Softball Stadium.

The Longhorn lineup leads Texas’ strong offensive performance this season. Sophomore leadoff hitter Devon Tunning is batting .279 on the year while accumulating a team-high 26 walks — over a fifth of the team’s total. Second in the order, sophomore outfielder Stephanie Wong leads the team in batting with a .368 average and has reached a base safely in a career-long streak of 15 games.

“Those two are seeing the ball very well right now,” head coach Connie Clark said. “I’m really pleased with our offense, and our ability to make needed adjustments has been tremendous.”

Despite the Longhorns’ road record and strong lineup, they have struggled in opening innings on several occasions this season. Texas is 9–8  in games when recording a scoreless inning. On the other hand, Texas is 10–1  when scoring more than one run in the opening frame. In last weekend’s three-game series against Kansas, this early momentum played a huge role.

In the first game, along with a series of walks, a couple of singles and a three-run homerun in the first inning helped the Longhorns jump to a quick 4–0 lead over the Jayhawks. The next game, the Longhorns took another 4–0 lead in the first, leading to another victory.

“We started off hot, and I think that was pretty significant to set the tone for the game,” Clark said after Friday’s victory over the Jayhawks.

On Friday, Texas gave Kansas starting pitcher Alicia Pille her first loss of the season after she started 18–0, and, in the second, the Longhorns’ opening burst led to Pille’s removal from the mound with just one out in the game.

“Coming into Friday at someone else’s place, you have the leadoff come out and get on and wreak havoc —  that’s one thing,” Clark said. “To do it a second-straight day, you saw a little of the air come out of the tires across the diamond. Kansas certainly kept battling, but to get the momentum is important.”