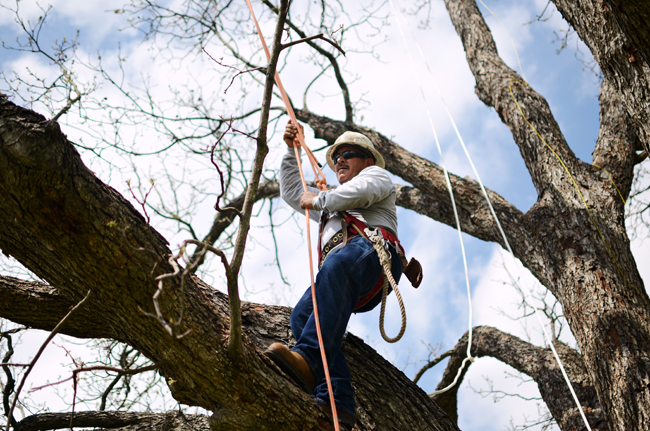 Although the employees of Austin’s Parks and Recreation Department’s Urban Forestry Division aren’t classically trained in dance, they’re the stars of Forklift Danceworks’ latest production, “The Trees of Govalle.”

The Urban Forestry Division will perform “The Trees of Govalle” on April 11 and 12 as part of Fusebox Festival. The festival opens Wednesday and celebrates art from a variety of mediums, including music, visual arts and theater. Forklift’s dance focuses on the Urban Forestry workers and the trees in East Austin’s Govalle Park.

“By utilizing the stories of community members and featuring performances by neighborhood artists … ‘The Trees of Govalle’ will celebrate the area’s rich history and tell stories of some of Austin’s longtime residents,” according to a press release from Forklift Danceworks.

Forklift Danceworks has a 14-year history of telling
often-overlooked stories through dance, said founder Allison Orr. In the past, they’ve worked with sanitation workers, baseball teams and firefighters.

“We make dances with people who aren’t dancers — or who aren’t thought of as dancers — but who work in a skillful and artful way,” Orr said.

Choreographer Krissie Marty said she and Orr usually find their subjects while driving around Austin, but “The Trees of Govalle” began when the Urban Forestry Division approached them. She said they received an email with the subject line: “Interested in trees?”

“We would approach communities and ask them to collaborate,” Marty said. “But, now, we’ve gotten a bit of a following, and organizations are starting to come to us.”

Orr and Marty both trained professionally in dance, but they intentionally work with people who aren’t practiced dancers. Marty said this redefines the idea of dance and who can perform.

“We define dancing as a design in space and time, not in having predetermined steps,” Marty said. “I ask people, ‘What is your definition of dance and dancers, and why do you define them that way?’”

In “The Trees of Govalle,” the forest is the performers’ stage.  Orr said the dance showcases the often-unnoticed dedication the Urban Forestry Division puts into caring for the thousands of trees across Austin.

“We get to show this amazingly hard and challenging work that people do in our community,” Orr said.

During the process of choreographing “The Trees of Govalle,” Orr said the Urban Forestry Division employees worked closely with the Forklift team.

“We got [the Urban Forestry Division] involved in the process,” Orr said. “So these workers aren’t just performing. They are creating right alongside our team.”

While creating the dance, Marty took movements the workers already knew, such as tree climbing, and turned them into choreography. She said the performance highlights the work the arborists do but in a theatrical way.

“We’re taking the movements that these workers already know and are familiar with and highlighting the beauty and elegance in them,” Marty said.

The last round of tickets will be released when Fusebox Festival opens Wednesday. The show is free to attend but requires a reservation.