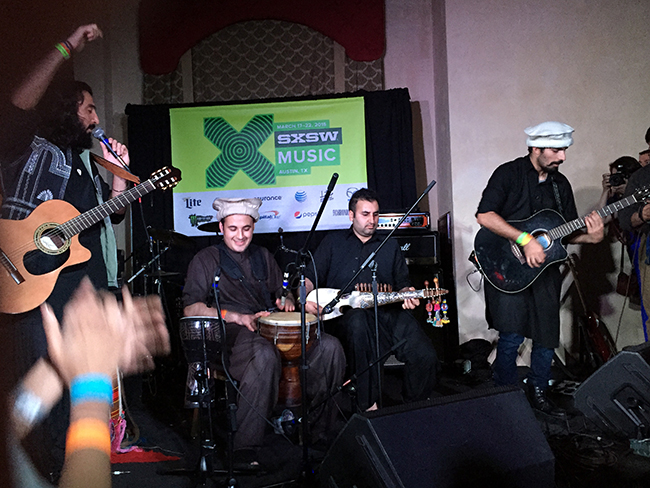 The rich culture of Pakistan still thrives thanks in part to the Butler School of Music here at UT, and the school’s three-year partnership with the National Academy of Performing Arts in Karachi, Pakistan.

The four regions of Pakistan — Sindh, Punjab, Khyber Pakhtunkhwa and Baluchistan — each represent unique sets of sounds. The more we, as musicians from Pakistan, collaborate and perform with artists around the world, the more we realize the uniqueness of our own sound.

Through NAPA, one of the first performing arts academies in Pakistan, Pakistani musicians have the opportunity to work with some of the best music and theater faculty available — individuals who have survived in Pakistan’s fragile entertainment industry.

Established in 2005, NAPA aims to mold students into artists who can express the uniqueness of Pakistani music. Professors at the institute do this by offering a unique set of academic courses that are not available in other schools or universities in the country.

The three-year partnership between Butler and NAPA has only furthered this goal. Facilitated by The South Asia Institute at UT and financed through a federal grant, the partnership allows 12 scholars from NAPA to visit and study at Butler for a semester. The first batch of four NAPA musicians came in the spring of 2014; a second batch of two artists came in the fall of 2014. I am part of the last batch of six scholars on this program, here to observe and audit music classes. My peers and I were selected for this program by our senior music faculty at NAPA based on our grades in music theory, the results of our practical/viva exams and our overall participation in music performances back home.

Studying in Austin has been a great learning experience thus far. In my classes, I study sight reading, composition, music theory, and voice. At the same time, another NAPA scholar, Arsalan Pareyal, and I are helping develop music curricula for NAPA and are also preparing for a collaborative ensemble performance. The ensemble consists of 12 people, six from Butler and six from NAPA, and we will perform in the spring of 2016 in both the United States and in Pakistan.

This semester Yousuf, another NAPA scholar and I are taking part in the Concert Chorale — singing great choral works of Haydn, Bach and Bernstein. We are also taking vocal pedagogy lessons from David Small and performing in the UT Middle Eastern Ensemble conducted by Sonia Seeman.

Waqas, another NAPA student and talented tabla player, is performing in the ensemble as well. He is also getting to learn music notation and drum lessons at Butler. Arsalan is learning jazz and working with the Jazz Combo at UT. Another student, Kashan Khan, is studying classical guitar and western music theory. Kashif Hussain from the theatre department at NAPA is learning acting. Needless to say, Butler has opened up a breadth of opportunities for us and other Pakistani artists who have gone through the program.

It feels great sharing the rich musical heritage of Pakistan with our peers through our lectures and recitals as well as through presentations at Butler and other colleges in Austin.

In such lectures, we always try to find a common tonality between traditional Pakistani music and American music — something that never ceases to amaze the audience. We all have many more opportunities to look forward to in the coming months.

My fellow students Arsalan and Kashan had their dream come true when they went for a guitar workshop with English guitarist Guthrie Govan and had the chance to meet and interview him. Waqas looks forward to meeting Ustad Zakir Hussain next week in San Francisco. I am looking forward to continuing to attend workshops and master’s level classes and recitals.

One of the best features of the program is an online video link set up by the State Department grant at NAPA. It enables NAPA and BSM faculty and students to interact and have live video lessons in real time. The first in the  series of online workshops this semester was with Small, during which NAPA students in Pakistan learned about voice technique, breathing and posture.

Along with integrating in the UT community, NAPA students have been performing for greater Austin. We played Pakistani folk and Sufi songs at St. Andrew’s Episcopal School and in The Fine Arts library at UT. Both performances were very well received. We also performed Turkish songs at a Nowruz, or Iranian New Year, festival at Central Market.

I look forward to our upcoming performances with the Middle Eastern Ensemble, Concert Chorale, Jazz Combo and at the University of North Carolina at Wilmington. But most of all, I hope that such exchanges continue, as they help facilitate a higher level of communication and understanding between the U.S. and Pakistan. I would like to thank the U.S. State Department, the South Asia Institute, NAPA and the Pakistani community in Austin for their support.

Shabbir is a visiting research scholar at the South Asia Institute in the College of Liberal Arts from Karachi, Pakistan.