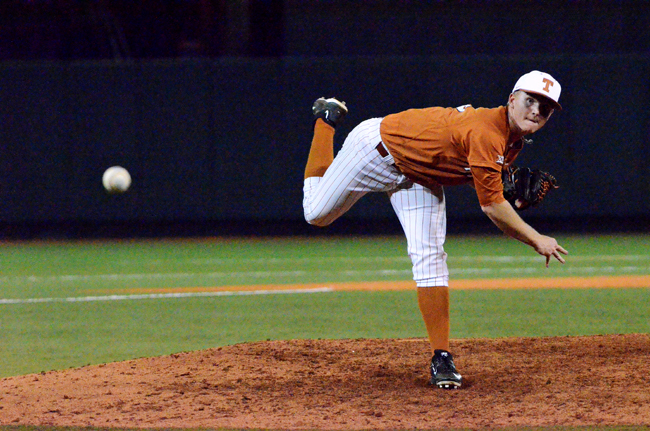 Texas rallied from a three-run deficit late Tuesday night to force extra innings, but, in a swift response, Texas A&M-Corpus Christi plated three in the top of the 10th to pull off the upset.

For the majority of the game against the Islanders, the Longhorn struggled at bat.

Texas was retired in order three times, including once on only seven pitches.

The offense finally struck gold in the latter innings, scoring twice in the seventh inning and once in the ninth to force extra innings.

However, in the top of the 10th, the Islanders struck for three runs to steal a 6–4 win.

“We gave them opportunities by not getting our outs on time and by giving them extra bases,” head coach Augie Garrido said.

Garrido made changes to the batting order, looking to shake off a poor performance at the plate at Nebraska over the weekend, where they scored three runs in three games.

But those changes made little difference, initially.

But in the seventh, the offense finally woke up.

With one out and runners at the corners, freshman third baseman Bret Boswell singled to center to get Texas on the board. Two batters later, with runners again at the corners, sophomore first baseman Tres Barrera scored on a wild pitch to bring Texas to within one.

Down to their final at-bats, the Longhorns, again, managed to manufacture a run. With one out, Boswell drew a walk, and then junior pinch runner Taylor Stell, who stole second base, replaced him. With a 1–2 count, freshman designated hitter Joe Baker doubled to left to tie the game.

“They turned it up,” Garrido said.

But Texas couldn’t keep the game tied in the top of the 10th. After loading the bases, freshman pitcher Connor Mayes gave up an RBI ground out and a pop out that landed in right field, allowing the Islanders to retake a 6–3 lead.

The Islanders built their early lead by making the most of its chances. In the third, Corpus Christi worked a two-out walk and a hit by pitch and then took the lead on a single.

Two innings later, two throwing errors put runners on second and third for the Islanders with one out before a successful squeeze bunt.