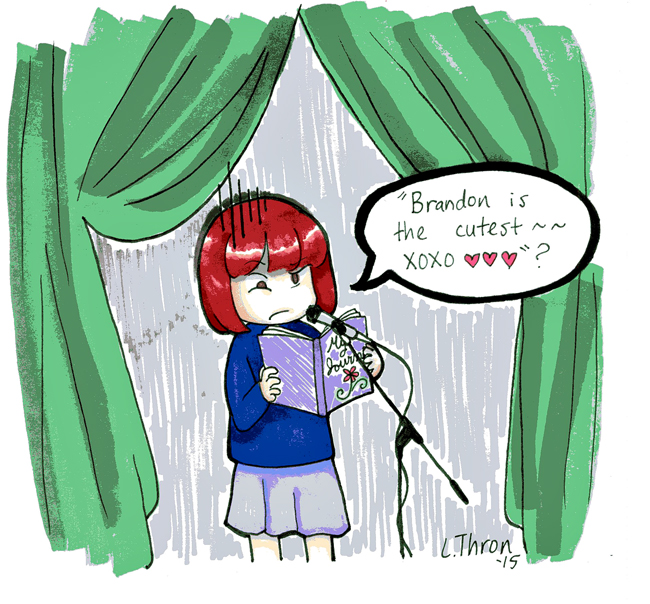 Most people hide their childhood diaries behind mounds of dust bunnies under their beds. Speakers at Mortified Austin shows prefer to relive their embarrassing moments by retelling them aloud to a crowd of strangers.

“Every kid has a story, and every kid has struggles,” said Pierce Purselley, executive producer of Mortified Austin. “Everything that you see on stage is absolutely true. It’s real, and it’s nothing but God-given awkwardness — no lying, no embellishing.”

Mortified Live is a national series that features adults sharing their most embarrassing childhood artifacts, such as diaries, love letters, home videos or school assignments, live on stage.

The project began in 2002, and the Austin branch followed in 2008. Each local branch of Mortified organizes its own Mortified Live event, while the national Mortified organization is responsible for the podcast, TV series and documentary.

Purselley, a UT alumnus, said the show, which takes place Friday and Saturday at Spider House Cafe, is an opportunity for its six speakers and audience members to reflect on their past and laugh about it.

“It is very cathartic to be able to get on stage and share your diaries,” Purselley said. “We have all been through it. We were all fragile; we were all frail; and we all survived.”

Purselley said a traumatic childhood left him with few memories of his youth. That is what drew him to the show. He said listening to other people’s stories helps him reconnect to his buried ones.

Speakers in the past have included a woman who wrote sexually explicit Hanson fan fiction in middle school and a woman who took her brother to prom. Speakers are regular people, most of whom are not trained performers.

About a month before the show, prospective speakers contact Mortified Austin producers and present them an item from their childhood. From there, the producers read through it with the speaker and choose the funniest material.

Michelle Dahlenburg, Mortified Austin producer, former participant and UT alumnus, said audience members typically relate to the emotions behind each story. She said knowing that someone else has dealt with a similar issue in their life shows people they are not alone in their struggles or weird idiosyncrasies.

“[Listening to Mortified stories] is this way of processing embarrassment and looking back on our own lives,” Dahlenburg said. “I love to watch the audience while we are doing the show and see their laughter. But they are not laughing at the person — they’re laughing with the person.”

Some of the most entertaining speakers can be heard on the Mortified podcast, which aggregates live recordings from speakers across all chapters. In addition to the podcast, Mortified has a documentary on Netflix with footage of live performances and a TV series downloadable from iTunes featuring celebrities’ embarrassing stories and artifacts.

Katie Moore, Mortified Austin organizing producer and former speaker, said this weekend’s audience members can look forward to hearing a speaker’s childhood rewrite of “Jurassic Park” and excerpts from the journal of a 12-year-old searching for a husband because she believed the Rapture was coming.

“When you see a person telling their story, and they are far removed enough to see the light at the end of the tunnel, it’s inspiring,” Moore said. “I think everyone — the audience members and the speakers — walk out of the show feeling good and feeling connected to other people.”