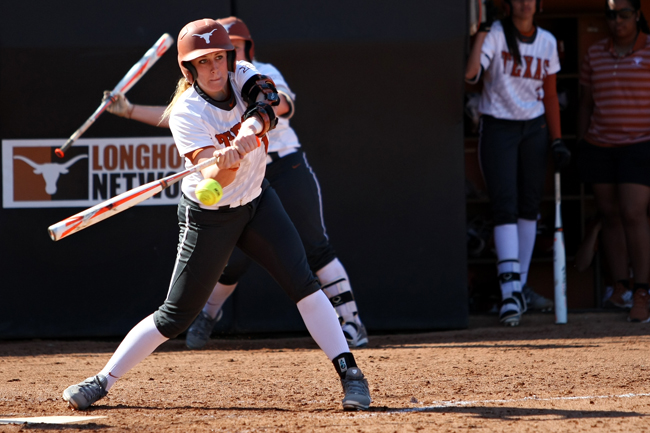 Longhorns fight from seven down to edge out Cougars. After a combined 26 hits and 25 runs, Texas defeated Houston, 13–12, Wednesday night to extend its win streak to a season-best six games and bring its record to 24–9.

The game was an old-fashioned Texas shootout from the get-go. In the top of the first, junior center fielder Lindsey Stephens, last week’s Big 12 Conference Player of the Week, sent one into the stands for a two-run home run to put the Longhorns on the board early.

In the bottom of the inning, Houston senior shortstop Selena Hernandez countered with a two-run home run of her own to tie the game up heading into the second.

The second inning, which saw no runs scored by either team, was the calm before the storm.

In the top of the third, sophomore left fielder Stephanie Wong hit her second home run of the season to give the Longhorns a one-run advantage. The Cougars reacted quickly, scoring three runs of their own.

Halfway through the game, the Cougars picked up their play, scoring five runs in the fourth. Down 10–3 heading into the fifth, the Longhorns began to fight back, swinging for the fences. With a couple quick hits and a generous error from the opposing team, Texas loaded the bases for junior right fielder Holly Kern. The pressure of trailing didn’t faze Kern as she hit a grand slam to cut the lead to 10–7 and put Texas back in the game.

Texas produced another strong inning at a crucial point in the game. Following a run by Wong, her third of the game, junior catcher Erin Shireman followed in her teammate’s footsteps and hit a home run of her own. Shireman’s three-run home run helped the Longhorns reclaim the lead for the first time since the third inning.

But Hernandez hit her second home run of the night to tie up the game and send the Longhorns and Cougars into the seventh inning at 11 apiece.

A single by freshman third baseman Randel Leahy ignited the final flame for Texas in the top of the seventh. Off a pair of singles and a pair of bunts, Texas scored two quick runs to give the Cougars just three outs to make up the deficit in the final frame.

Freshman pitcher Kristen Clark and the rest of the Longhorns wasted no time stepping up on defense, forcing the first two batters to ground out. But Houston junior outfielder Katie St. Pierre pushed one last time. St. Pierre, who is hitting a team-best .367 on the year, doubled to left and scored on the next play to finish 2-for-4 with three runs and a walk.

Down one with one out left, Hernandez hit a single to put two on, but sophomore third baseman Shelby Miller grounded out to second to end the game and give the Longhorns the victory.

The Longhorns will seek their 25th win this Friday against Texas State in San Marcos.