After rough few weeks, Texas offense looks to get back on track at Oklahoma State 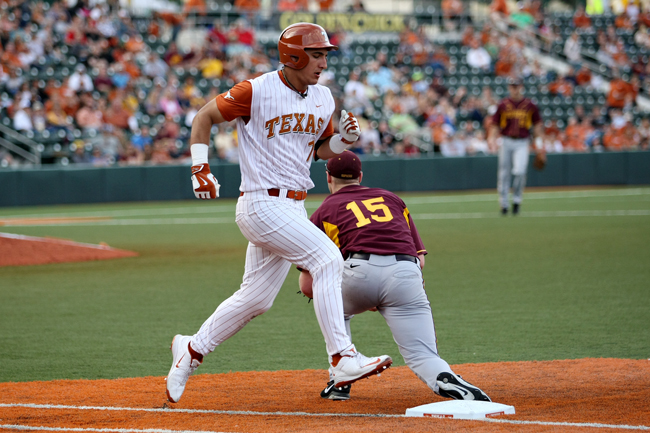 Other than the sweep of Kansas State a few weeks ago, the latter half of the last month was rough for the Longhorns.

In the last six nonconference games, Texas has only pulled out one win — a comeback victory at Texas State — while averaging just three runs per game.

Tuesday’s loss to Texas A&M-Corpus Christi, in which the Longhorns struggled to hit for the first six innings, came on the heels of only scoring three runs in three games at Nebraska over the weekend.

“We need to play hard for nine innings from beginning to end,” Garrido said.

Putting together a complete game has been a struggle for Texas in recent weeks. After jumping out to a hot start, the Longhorns offense has cooled off considerably, particularly in the first two-thirds of the game.

In those last six nonconference games, Texas has only scored a combined three runs in the first six innings.

Garrido said the difference, particularly in the loss Tuesday, comes when the players realize they might lose the game.

“In the seventh inning, there was a huge change, and we could just see that from a coaching standpoint,” Garrido said Tuesday.

Despite the recent struggles, Texas still sits comfortably in the conference standings. Because of a series win against West Virginia and the sweep of Kansas State, the Longhorns are first in the Big 12 with a 5–1 conference record, and they hold a one-game lead over Oklahoma State and TCU.

But flipping the switch against Oklahoma State might be easier said than done.

The Cowboys, having already taken two of three games from conference favorite TCU recently, come into this weekend’s series tied for second in the Big 12. A series win over Texas would give them a big leg up in claiming the regular-season title.

Oklahoma State also has a solid pitching staff, which can shut down most lineups. The Cowboys’ collective 2.61 ERA ranks second in the conference.

Nevertheless, the Longhorns just have to keep moving forward, according to freshman catcher Michael Cantu.