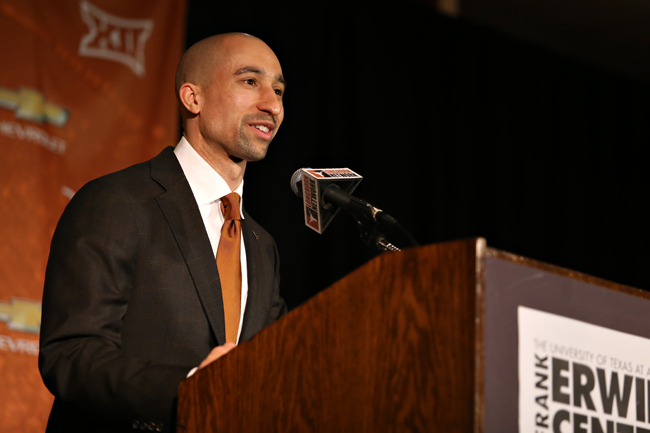 Smart becomes the 24th head coach of the program, replacing Rick Barnes, whom Texas let go of last weekend. He will be formally introduced at a press conference Friday.

Texas men's athletic director Steve Patterson, who flew to Richmond, Virginia, on Thursday to meet with Smart, said in a statement that the program is excited about the new addition.

"We are extremely excited today to announce that Shaka Smart will be joining us in Austin as our head men's basketball coach," Patterson said. "He is a smart, driven, dedicated coach and developer of young men who the entire basketball world has watched with admiration for some time."

Smart leaves Virginia Commonwealth after six seasons, where he made an appearance to the Final Four in 2011 and claimed a 7-5 record in the NCAA Tournament.

"I'm looking forward to building on the past success of Texas basketball," Smart said in a statement. "This is a proud program that goes back over 100 years, I embrace that history. There is tremendous potential in this program, and my job is to work extremely hard to ensure that we realize that potential. I can't wait to get to work."

Smart, 37, has spent the past six seasons as the head coach at Virginia Commonwealth. He burst into the national spotlight in 2011 when he led the Rams to the Final Four. He’s won at least 26 games in each of his six seasons at VCU and made the NCAA Tournament in each of the last five years.

Although he never won a regular season conference title in his time at VCU, Smart boasts an impressive 163–56 career record in his six seasons as a head coach and is 7–5 in the NCAA Tournament.

According to multiple reports, Smart accepted the position at Texas after meeting with his team late Thursday night, launching him into what is only his second head coaching position. Athletic director Steve Patterson was rumored to have had his eyes on Smart from the start, flying to Richmond, Virginia, earlier Thursday for a meeting.

The deal-making hit a bit of a hitch after Smart’s team meeting got delayed for two hours, but, at the end of the day, Texas got its guy.

Before his stint with the Rams, Smart spent time as an assistant coach with California University of Pennsylvania, Akron, Clemson and Florida stretching back to 1999.

Texas football head coach Charlie Strong also served as an assistant coach for the Gators’ football team while Smart was with the basketball team.

Thanks to his immediate success at VCU and his charismatic personality, Smart emerged as one of the hottest commodities in the coaching market in recent years. UCLA, Maryland and Illinois attempted to bring Smart aboard to no avail in years past. Some believed Smart was content with remaining at VCU, but coaching at Texas, a team with seemingly endless resources, proved to be too big of an opportunity for Smart to pass up.

The Longhorns could contend right away under Smart’s leadership, as they expect to return much of their roster from this past season next year. Smart likes to run a high-pressure defense called the “Havoc” defense, a system that athletic guards such as sophomore Isaiah Taylor and junior Demarcus Holland figure to thrive in.

Smart replaces Rick Barnes, whom Texas let go Sunday after 17 years. Barnes, who is the winningest head coach in program history with 402 wins, was told after the Longhorns’ loss to Butler he would return as Texas’ next head coach. However, Barnes said, “things changed,” and he was later dismissed. Barnes accepted the head coaching position at Tennessee this week.