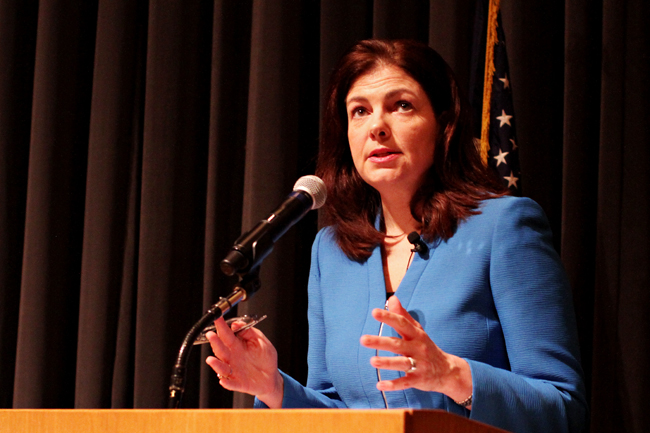 Iran’s agreement to limit its nuclear program is crucial to American foreign policy, according to U.S. Sen. Kelly Ayotte (R-New Hampshire). At an on-campus event Thursday, Ayotte said nuclear inspectors must be able to perform unannounced inspections of Iran’s nuclear facilities at their own discretion to restore trust in the America-Iran relationship.

Ayotte spoke at an event hosted by the William P. Clements, Jr. Center for History, Strategy & Statecraft. Ayotte is a member of the Senate’s armed services committee and the chairwoman of the subcommittee on readiness.

Ayotte said U.S. policymakers have had difficulty trusting Iran because of Iran’s hostility towards the U.S.

“Iran’s navy conducted a simulated attack against a mock U.S. aircraft carrier in the vicinity of the Strait of Hormuz,” Ayotte said. “They have previously said that they would like to wipe Israel off the map, and, even as recently as March 21, Iran’s supreme leader has declared ‘Death to America.’”

Ayotte said the U.S. president should sign a bill allowing Congress to review any agreements with Iran, including the ability to impose congressional sanctions on Iran within a 60-day period.

“It was the Congress on a bipartisan basis that actually put the toughest sanctions in place,” Ayotte said. “Before they are removed, we have a constitutional role in ensuring that the agreement is one that we think really protects the interests of the United States of America.”

Plan II senior Mark Jbeily, who attended the event, said pressure from sanctions, combined with President Barack Obama’s willingness to work with Iran, are factors that contributed to Iran’s preliminary agreement to limit the nuclear program.

UT System Chancellor William McRaven, who also attended the event, said building and verifying details of the negotiations with Iran are the keys to moving forward.

“We need to be able to trust, but verify before we can move forward on anything with Iran,” McRaven said. “Their past has not shown that they are always very trustworthy. If we can build a framework, get an agreement in place and make sure that we can verify all the details of the agreement, then I think we can move forward.”