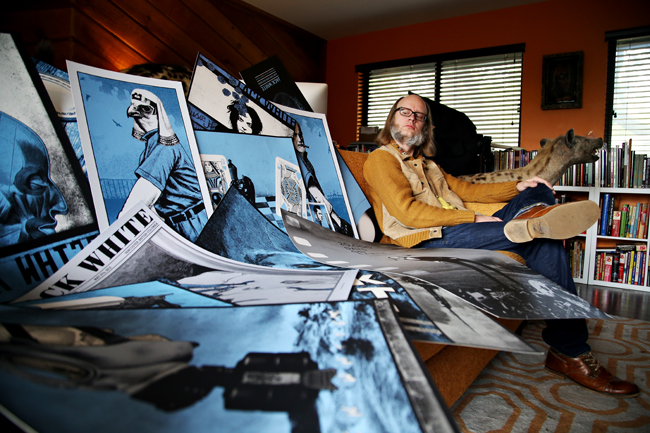 In 2003, after designing posters for a number of smaller acts, Jones received an opportunity to design a gig poster for the White Stripes. White’s broken finger forced the band to delay the tour, giving Jones more time to create a series of posters. White, impressed by the posters, asked Jones to design additional posters for each day of the tour, starting off their now 12-year-old partnership.

As a child, Jones was mesmerized by an encounter with an airbrush artist on the streets of Tennessee. He said the event inspired him to pursue a career in the arts, although his parents were less than enthusiastic. Still, Jones said he simply couldn’t escape art. He originally entered UT as a pre-med student and eventually switched to advertising in the hopes of making gig posters.

“I just kept going back to it,” Jones said. “It was what I would do when I was by myself. I’d make collages, costumes [and] action figures, so I slowly kept changing my major until I decided I wanted to do gig posters.”

Jones received his first chance when a friend in local punk-rock band Pink Swords asked him to design a poster. Although he said his first pieces were far from perfect, doing the work made him realize he could pursue gig poster design as a career.

“I was unaware at the time that the stuff I was making wasn’t great,” Jones said. “I just needed wider exposure, so I went online; I looked at what other people were doing, and I knew this is what I wanted to do for a living.”

Now, when he’s not designing posters for the White Stripes, Jones assists other artists as the creative director of Mondo, an Austin-based shop that specializes in limited edition movie posters.

When designing posters, Jones said listening to the artists’ songs is important but listening to interviews gives him a better sense of his clients’ personalities and tastes. Jay Shaw, head of design at Mondo, has printed some of the posters Jones designed. Shaw said Jones always comes prepared with very clear ideas for the posters.

“When [Jones] assigns a poster to an artist, he’s going to mold it into something he thinks Jack will like,” Shaw said. “We worked together on a tour poster for one of Jack’s shows in Ireland. [Jones] came to me with this one obscure lyric in one of the songs and somehow based the whole design off of that.”

Jones’ hard work paid off in 2011 when he won a Grammy for Best Boxed or Special Limited Edition Package for “Under Great White Northern Lights.” Jones worked closely with White throughout the process, and eventually Jones insisted they submit the package for a nomination.

“I knew we had done a great job on that package, so I knew we had a chance,” Jones said. “I told them to make sure they sent it in, which is something I’ve never said for any of the other works I’ve done.”

Apart from his work with White, Jones has also designed posters for bands including Arcade Fire and the Arctic Monkeys. After over a decade of late nights spent working and waking up from poster-related nightmares, Jones said he can’t imagine doing anything else.

“Jack could fire me tomorrow,” Jones said. “That’s probably why I do well. I stay up late, and I try and do the best work that I possibly can.”