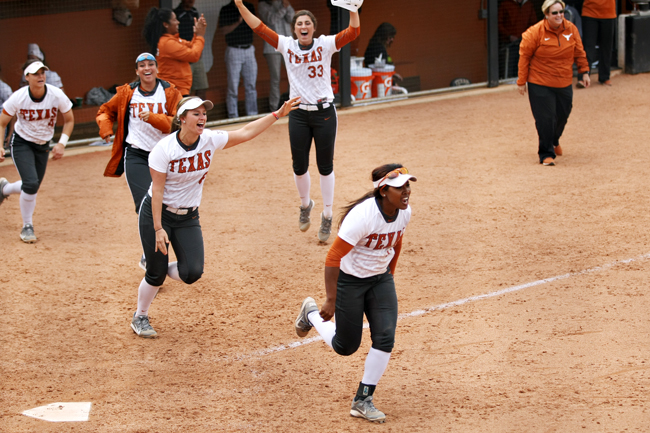 Texas softball rolled past Texas State this weekend, improving its season record to 26-9 and maintaining a number of ongoing streaks.

The team has now won eight games in a row, its longest streak since 2013. The Longhorns’ 10–2 victory over the Bobcats in five innings Friday  was also their ninth-consecutive road victory. They followed with their third-straight home walk-off win Saturday.

In both games, Texas got on the board in the first inning, stretching that streak to seven games.

“From the first inning, we were just on them,” junior center fielder Lindsey Stephens said. “When [teams] come back, it’s always a little stressful, but not one time do we ever doubt that we can pull off the win.”

The long ball anchored Texas’ offense during game one, which took place in San Marcos in front of the second-largest crowd Bobcat Softball Stadium has ever seen.

Stephens went 2-for-2 with one walk in the game and hit her 11th home run of the season. Sophomore shortstop Devon Tunning blasted two home runs and went 2-for-2 with a pair of walks to extend her career-best on-base streak, which now sits at 20 games as she also reached base safely in game two.

Freshman pitcher Erica Wright struck out four and gave up just one hit to improve her season record to 11–4. Wright’s performances have been increasingly consistent, and she said she hopes to continue turning in strong performances as the team prepares for a tough Big 12 schedule.

“The biggest thing is just to continue attacking the strike zone and focus on taking deep breaths, not getting caught up in the moment and working on hitting my spots and producing what we want to happen,” Wright said.

Sophomore Lauren Slatten attained the win from the mound, improving to 2-0 on the season. She threw six innings, gave up seven hits and struck out a career-high seven batters.

The come-from-behind victory, Texas’ 10th of the season, once again exemplified the Longhorns’ competitive side.

“Any day, any given team can be beat,” Stephens said. “It’s good to know that even against good teams, we can continue to fight, rally up runs and get things going on our side.”

With eight home games ahead for the Longhorns, including two conference series, head coach Connie Clark said she wants her team to stay focused on themselves.

“It’s really about what we do — are we throwing strikes, having quality at-bats, putting bunts down when we need to, playing defense when we need to, all those things,” Clark said. “We’re getting to the next pitch as good as we ever have, and that’s really what we’re focused on right now.”