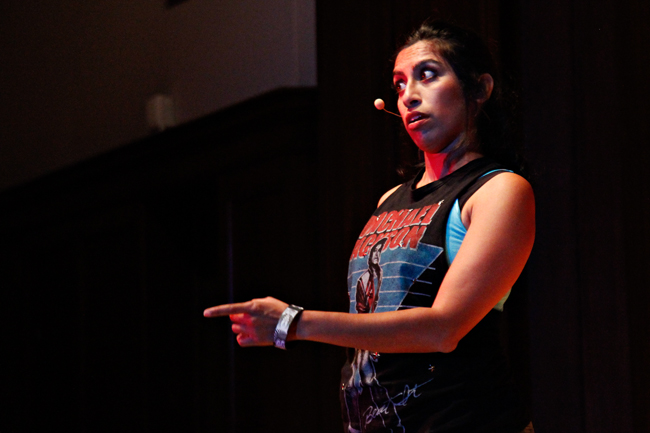 UT alumna Rasika Mathur  works as an actor, comedian and writer. Mathur will perform Tuesday at the Union. Mathur spoke with the Texan for a Q&A.

The Daily Texan: How did you get into comedy and performing?

Rasika Mathur: I wasn’t really the class clown in high school, but I like to observe people and pick up on the weird things they did. I used to make funny speeches in my high school classes. I did these little stand-up, 10-minute comedy acts. It started as an assignment, but then people began asking me to do them just for fun.

DT: What did you do while you were at UT?

RM: I was an advertising major, and I thought that I was good. But then I got a particular professor that was brutal, and that kind of scared me. I started to think that I should do something different with my life. I focused on extracurricular stuff instead. It was actually when I performed at the Indian Student Association talent show that I thought, “Oh, maybe I can make something out of this stand-up thing.”

DT: In your comedy album “the Sari (W)rap,” you talk about growing up as an Asian-American immigrant in Houston. How has that influenced your perspective?

RM: The immigrant circle when I was growing up in Alief, Houston, was really tight-knit. Me and the other kids spent a lot of time hanging out and making fun of our parents and the community aunties, pointing out things about the way they talked or acted, and that developed into something that I focused on during my acts. I grew up with these very tense, fearful people in my house, and now I’m starting to realize where they were coming from.

DT: What are some of the biggest challenges you’ve faced in your career?

RM: You have to know your self-worth in the industry, but you also have to ask for help from people who are better than you. You need to know how to talk to people more famous or more accomplished than you, and I think that I let myself get intimidated sometimes in circles where I thought I was the weakest link, and I didn’t speak up. It was sad because those might have been big opportunities for me to learn. Sometimes after a show that I’d flopped, I’d beat myself up about it and keep thinking about my mistakes. When I’d see a more famous comedian around town, I’d freak out about it, thinking that the show that I’d bombed would be their lasting impression of me. But they don’t care about it at all! Improv is about mistakes and adapting to them, and that’s been a learning curve for me. The struggle most of the time is getting out of my own way.

DT: What’s next for you?

RM: I love the idea of selling stuff online that people would actually want to buy, like funny posters, comics and bumper stickers. I want to write a book, too. I’d love to do that in conjunction with shows, just sell stuff and make people laugh. And hey, maybe throw in a couple of cute dogs, but not the kind that wear sweaters. That would be a good life.