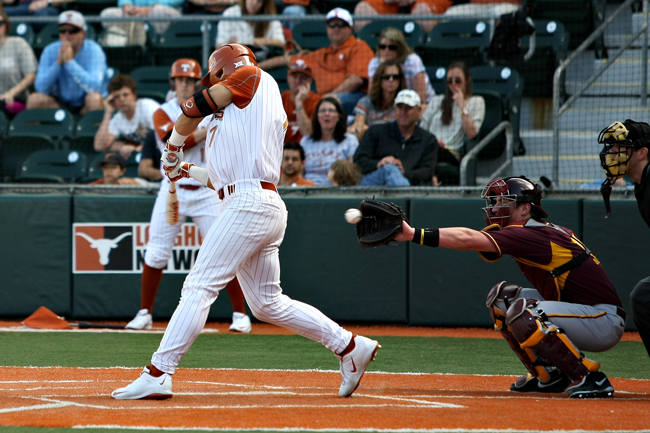 The Longhorns’ recent misfortune continued Sunday as they dropped their seventh-consecutive game in an 8–3 loss to Oklahoma State.

The Cowboys struck first with a run in the first inning, but the Longhorns were able to answer in the top of the third. Sophomore center fielder Zane Gurwitz drew a one-out walk and freshman shortstop Joe Baker followed with a single. Gurwitz stole third and both runs came home on a bloop RBI single by junior left fielder Ben Johnson to give Texas a 2–1 lead.

But Texas struggled once Oklahoma State loaded the bases in the third. Cowboys sophomore first baseman Dustin Williams hit a ball that was ruled fair before hitting the first base umpire in foul territory and ricocheting to the right. The incident put two runs on the board, and they struck for another run in the inning as the Cowboys extended their lead to 4–2.

The Oklahoma State onslaught continued in the fourth inning as it added four runs. All of the runs came with two outs, and the Cowboys pushed their lead to 8–2.

The breaks kept going Oklahoma State’s way. In the top of the sixth, Johnson led off the inning with a triple. Sophomore catcher Tres Barrera followed with a line drive that Cowboys senior second baseman Tim Arakawa dove for. The ball appeared to hit the ground, but the umpire called it a lineout. Johnson, who was running toward home, was thrown out at second as a result.

Texas scored a run in the ninth inning when senior right fielder Collin Shaw hit an RBI single to cut the Oklahoma State lead to 8–3. But it was too little, too late, and the Cowboys closed out the game and the sweep.

Texas sophomore pitcher Kacy Clemens took the loss for the Longhorns while Cowboys senior pitcher Michael Freeman put up a dominating performance. Freeman struck out seven and only allowed two runs in eight innings of work.

Although Freeman was able to contain the Longhorns, head coach Augie Garrido said he was content with Texas’ effort at the plate Sunday.

“The message is that we played a much better offensive game against one of the best pitchers in college baseball today than we have in the past,” Garrido said. “We actually took a lot better at-bats today, got really aggressive against good pitching, and we need to build off that.”

Texas entered the weekend atop the Big 12 standings, but the three-game sweep drops the Longhorns into fourth place.

Texas will try to end its losing streak against Wichita State (14–18) at 7 p.m. Tuesday in Austin. The game will be broadcast on Longhorn Network.