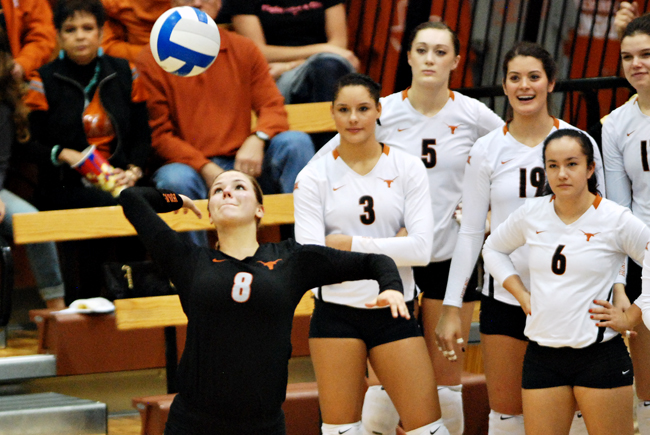 The No. 2 men’s golf team returned to action this weekend, finishing in fourth place at the 3M Augusta Invitational.

Freshman Scottie Scheffler, who led the team for the first time this season, birdied five times on the final round to record a personal best 12-under par (67–70–67) and land in second place on the individual leaderboard.

As a team, the Longhorns finished six strokes short of first-place finisher New Mexico, which finished 26-under par.

Sophomore Beau Hossler and freshman Doug Ghim tied for 20th place, each with a 3-under-par 213 over the three rounds. Senior Kramer Hickok came in 42nd with a 218, and sophomore Gavin Hall rounded out the Longhorns with a 222 for 54th place.

The team continues its season next weekend in Santa Cruz, California at the Western Intercollegiate.

After 15 years at the head of the Longhorns’ program, head coach Michael Center secured his 300th win when No. 9 Texas defeated No. 21 Texas Tech by a score of 4–1 Saturday.

The Longhorns got off to a rocky start as they lost the doubles point for the 10th time this season. But the Texas deficit didn’t last long as the Longhorns rallied with four consecutive victories at the singles positions, highlighted by a hard-fought 7–6, 0–6, 6–1 victory by senior Clement Homs, which improves his season record to 5–0.

Following the victory over Texas Tech, Center’s new record at Texas stands at 300–105. In addition to his .741 winning percentage, Center has coached 16 ITA All-Americans and has won Big 12 Coach of the Year four times throughout his career with the Longhorns.

“I’m proud of the student-athletes I’ve had, not only this year, but in the past, that have made contributions to our program while they were here and after their graduation,” Center said. “It has been very gratifying, and I’m looking forward to many more with this group.”

Texas will continue its four-match home stand Tuesday against unranked UTSA at the Caswell Tennis Center in Austin.

Texas track and field didn’t send many runners to California for the Stanford Invitational, but the ones who went were successful on the long trip.

Friday represented the only running action for the Longhorns. Senior Craig Lutz and sophomore Sandie Raines led the group of distance runners from Texas in the team’s first performance since the 88th Nike Clyde Littlefield Texas Relays.

The Longhorns have a chance for some home cooking at the Texas Invitational this weekend in Austin. The meet begins Saturday morning with the women’s hammer throw at 10 a.m. and will conclude with the highly anticipated men’s 4×400-meter relay Saturday evening.

It might only be the spring season, but Amy Neal was in midseason form Friday night.

The junior outside hitter posted 22 kills, 15 digs and three aces in a 4–1 Texas win over SMU, the team’s first victory of the spring.

Texas dropped the opening set of the match despite outhitting SMU .267 to .191. But the Longhorns dominated from that point on. They held the Mustangs to a negative hitting percentage in the second set and took the remaining three sets with an average hitting percentage of .317.

Sophomore middle blocker Chiaka Ogbogu, who was named to the NCAA Division I All-Tournament team in the fall, recorded a team-high .522 hitting percentage along with 14 kills and nine blocks. Sophomore outside hitter Paulina Prieto Cerame finished the night with 12 kills and 16 digs.

The Longhorns will be back in action this weekend at the F.A.S.T. Complex Collegiate Invite in Houston. Texas returns to Gregory Gym for its last match of the spring season on April 24. The team will play against UTSA.

In the first-ever matchup between the two teams, the Ohio State Buckeyes toppled the Longhorns, 4–1.

The Buckeyes started off strong, swiftly taking the doubles point.

The Texas sophomore tandem, Pippa Horn and Neda Koprcina, fell to its competition on court three and Ohio State clinched the doubles point on court one. Ohio State’s No. 44-ranked pair of sophomores, Gabrielle De Santis and Sandy Niehaus, defeated the Texas duo of junior Breaunna Addison and senior Lina Padegimaite in a 6–2 decision.

Freshmen Ryann Foster and Dani Wagland held their own on the second court before play was suspended.

On the other courts, Texas struggled to win a set against Ohio State. Koprcina dropped a 6–1, 6–1 decision to Niehaus on court three, allowing Niehaus to seal her eighth-straight singles victory.

Foster and Wagland fell to their competition, freshman Anna Sanford and sophomore Miho Kowase, on the second and fifth courts. Padegimaite’s and Horn’s matches were both suspended following Ohio State’s victories on the other courts.

Over the weekend, Texas added two new games to their schedule, including an upcoming match against Abilene Christian University at 4 p.m. Tuesday at the Whitaker Tennis Courts.