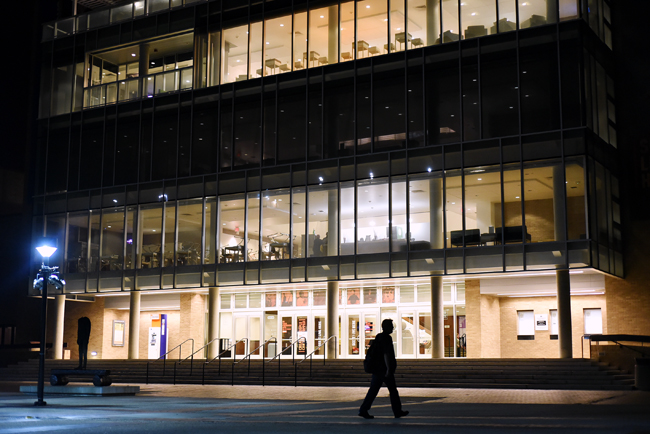 Bass Concert Hall and Texas Performing Arts Center were evacuated Monday after a bomb threat was reported to the Butler School of Music.

UTPD responded to a call that reported a bomb threat in the Butler School of Music area around 8:50 p.m. The Performing Arts Center and then the Bass Concert Hall were evacuated completely in response to the threat.

This event is the second threat to UT this semester — the first being to a food trailer in West Campus this February. There was also a threat in September 2012 resulting in the evacuation of the entire campus. In both cases, UTPD did not properly notify students.

UTPD did not send out an email notifying students of Monday’s potential threat, but the official UTPD Twitter account sent out two tweets about the threat.

Although both buildings were cleared for entry, there was confusion among UTPD regarding the location of the threat.

“The PAC was also evacuated,” UTPD Lt. Darrell Birdett said. “Originally, the PAC got evacuated, and then we came over here. There was some confusion, I think, about what building the actual threat came into.”

Birdett said he was not sure how many people were evacuated in the threat, although UTPD mandated a full evacuation of all possible buildings.

Attendees of a concert at the Performing Arts Center were evacuated to the Darrell K. Royal-Texas Memorial Stadium for 30 minutes. James Ellerbock, an attendee and teacher at Bowie High School, said there were armed police officers on the scene.

“We were watching a show, and this woman came in and said there was a serious threat, and we were asked to leave,” Ellerbock said.

Students rehearsing and preforming in the Butler building were asked to leave, as well. While most were evacuated, UTPD failed to notify music performance sophomore Adam Lundell of the threat.

Lundell said he was rehearsing in a practice room when the evacuation began. He said a group message between other music students notified him of the threat. Lundell was in the building for about an hour before leaving.

“I texted one of my friends, and he said he told an officer what room I was in, and he came in, and [the officer] came in and got me,” Lundell said.

Lundell said it was exciting at first,  but then he grew nervous because he knew he should not be in the building.

“I was scared for a little bit, so I kept playing the piano to calm my nerves,” Lundell said.

Music studies junior Hugo Ramirez said he was asked to evacuate after a concert, but he was not too shocked by the threat because he was previously evacuated during a previous University bomb threat.

“At this point, this is, like, the second time that I’ve been here that this has happened,” Ramirez said. “I was a little surprised, but in the end I wasn’t too shocked.