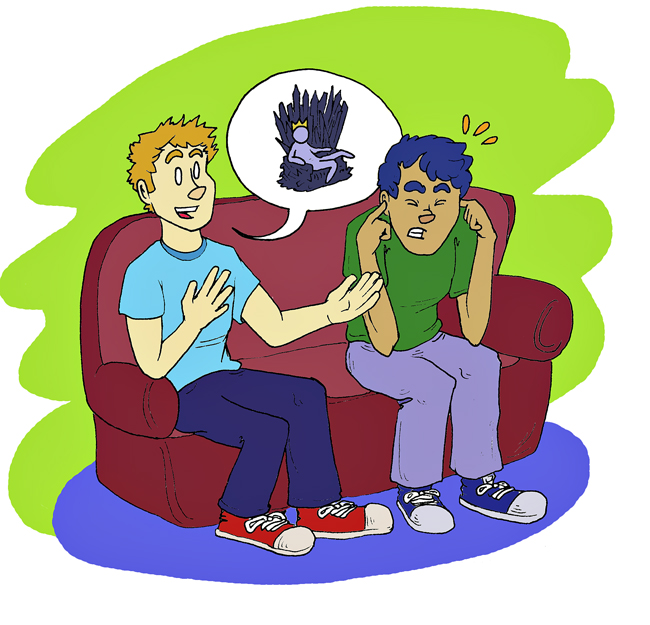 Spoiler alert! George R. R. Martin’s “A Song of Ice and Fire” books will give away the finale of “Game of Thrones.”

For Martin’s loyal readers, this poses a conundrum: Should they stick with the show to the last episode, or should they stop watching the show and wait until the final book is released?

The threat of others spoiling movies, shows and books defines how people watch, read and talk about them. People often have to make sure everyone is up to speed with a show or a novel before discussing it.

“Spoiler alert” warnings pervade websites that leak tidbits of film productions, just in case a visitor doesn’t want to click on an article that will ruin a twist.

The Internet makes it hard to avoid spoilers, but don’t worry: Spoilers aren’t as bad as they seem.

Radio-television-film professor Kathryn Fuller-Seeley said online streaming makes it possible to view movies and shows at one’s own pace, allowing audiences to hold off on watching a show and binge watch it later.

People jump into movies and shows at different speeds, meaning some will know more plot points than others. The fewer episodes viewers have covered, the more spoilers they’ll have to watch out for.

“In my classes, I can’t find anything that everybody has seen together,” Fuller-Seeley said. “That idea of riding the narrative of a story like an amusement park ride, of being surprised — that is at risk of being lost when we don’t watch everything at the same time anymore.”

Trolls also lurk the Internet, dropping spoilers for all forms of entertainment left and right.

But spoilers can actually improve the experience with a movie, show or book. Without having to stress about how a book ends, audiences can appreciate the style and techniques. With movies and shows, people can pay more attention to the acting, music and cinematography.

“You’re not limited in your view to just following the story, of riding one roller coaster,” Fuller-Seeley said. “You get to try out the whole theme park.”

Radio-television-film freshman Preston Poole said he learned about the infamous Mandarin twist in “Iron Man 3”’ before seeing the film. Audiences who went into the film unspoiled could only talk about the unpopular plot point.

Poole said he enjoyed the film more because he got over the shock before seeing it, allowing him to admire how the twist served the movie’s themes.

Fuller-Seeley said she wishes she had “Frenzy,” a crime thriller by Alfred Hitchcock, spoiled for her. She saw the movie during a class screening in graduate school.

“A good friend had been murdered the week before, and the professor didn’t give me the spoiler alert,” Fuller-Seeley said. “I get to that scene of the woman’s death, and I am so traumatized. I freaked out and yelled at the professor. Without the spoiler, I got so drawn into the story that it [shocked me] all too well.”

“Game of Thrones” will give away the conclusion to its unfinished source material, but spoilers won’t necessarily make the books any less exhilarating. Readers who know how the story ends will be able appreciate how the writers and producers set up the finale. Spoilers won’t ruin your experience; they’ll make it better.