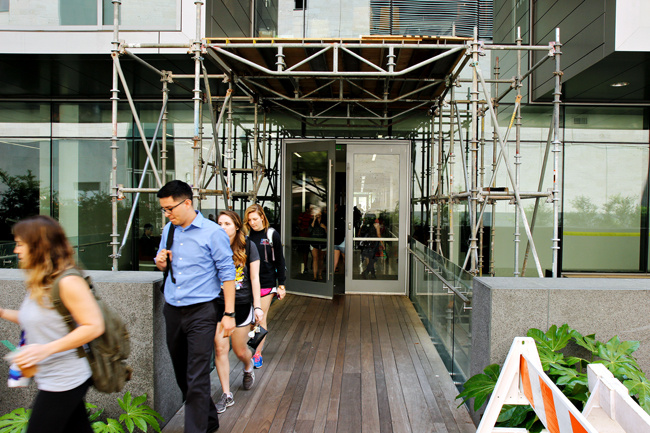 Temporary barricades will remain around the perimeter of the College of Liberal Arts building until UT Facilities Services staff can determine what is causing the building’s large glass windows to break.

While the construction barricades are temporary, Lentz said she is working on putting up better temporary barricades and coverings over the doors.

“We want to make sure people don’t get hit by falling glass,” Lentz said.

Approximately five windows have cracked, but glass from those windows is not raining down on people entering the building, so the barricades are more of a precaution, according to Lentz

Stephanie Sebastian, international relations and global studies senior, said the barricades have forced her to take different paths to her classes.

“Usually I go from the bus stop near the stadium and go to the bottom floor where my classes are, but, since that’s blocked off, I have to go on the right side of the fountain and go up and cross over,” Sebastian said. “I’m annoyed that I can’t get to the CLA as easily as I could before, but, at the same time, you can’t help if glass is breaking.”

Vandalism did not cause the cracks in the windows, Lentz said. The windows cracked naturally, but the glass is being tested to determine why it is breaking.

“The construction manager is overseeing inspection by the glass subcontractor, and UT System … is having the glass break analyzed by a testing lab,” Lentz said. “These windows contain safety glass, but all glass is subject
to breakage.”

Beause the glass is safety glass, Lentz said if it were to fall and break, it would not have sharp edges. Safety glass is used in multiple buildings across campus.

The CLA building opened in spring 2013, making it one of the newest buildings on campus. The building, which has a LEED Gold certification from the U.S. Green Building Council, was designed to maximize natural lighting throughout the day.

“I think that’s weird because I would assume that newer buildings would be stronger,” Sebastian said. “I don’t know why it’s happening because I think since it’s newer, they should have been more prepared for it and used the right materials and glass to make sure that it doesn’t break.”

It is unclear as to when the barricades will go down and access to the patios and entrances will be reinstated.

“The barriers will remain in place until the window glass break issue has been fully resolved to the satisfaction of campus administration,” Lentz said. “The campus administration is taking these steps — inspection and analysis of the glass as well as installation of safety barriers — to ensure the safety of the campus community.”

Government senior D’Wahn Kelley said he did not know why the barricades were placed around the building, but it does not affect his access to the building.

“As long as students are safe and it does not create a great burden, I am fine with the barricades,” Kelley said.