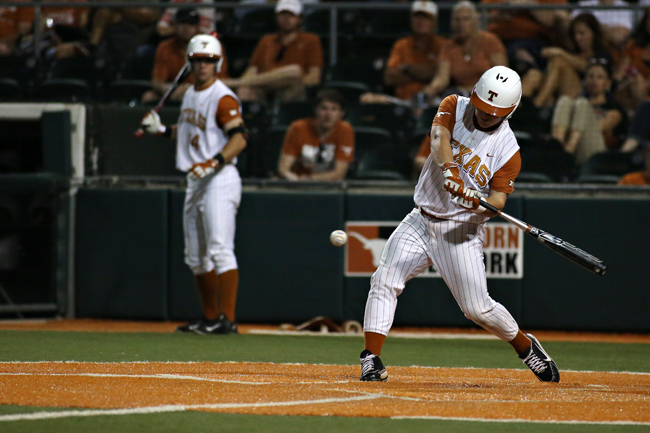 After suffering a seventh-straight loss Sunday to Oklahoma State, head coach Augie Garrido had two options — tell the team what it should be doing, which would add on more pressure, or keep an optimistic attitude about Texas’ current situation.

“Our coaches decided that we should make sure they recognize the opportunities they have,” Garrido said. “We have everything we want out in front of us by playing team baseball.”

And, at least for one night, it worked. On Tuesday, the recently dormant offense struck for five runs in the first four innings and held on against Wichita State for the team’s first win in two weeks.

Now, the trick will be for the Longhorns to continue their momentum in a three-game showdown with rival Oklahoma this weekend.

“That’s where the excitement is,” Garrido said.

The seven-game losing streak dropped the Longhorns out of almost all of the major rankings and pushed the team to fourth in the Big 12.

“[The rankings] helped build negative momentum,” Garrido said. “It’s hard to clear that out of your mind.”

With the Longhorns looking for positive momentum heading into the key conference series, Garrido said the coaching staff kept the message light to keep the team from getting lost in its failures. He also had help from the locker room.

Senior second baseman Brooks Marlow said players took on more of a leading role in the meeting before the game.

“Coaches can only do so much,“ Marlow said. “It’s just us guys coming together and having that great energy and feeding off each other, and that’s what we did [Tuesday].”

The five runs Tuesday were the most the Longhorns have scored in a game since the 6–4 win at Texas State on March 24 — the last win for the Longhorns.

But winning a midweek game against an up-and-down Wichita State team and beating the rival Sooners are two separate challenges.

Oklahoma comes into this weekend in a unique position. The Sooners, currently ahead of the Longhorns in Big 12 with a 6–3 conference record, had won five-straight games before Tuesday night, when Oklahoma quickly found itself on the wrong end of a 24–2 decision against Oklahoma State.

Still, the Sooners are third in the Big 12 with a .285 batting average and 209 runs scored. Texas, on the other hand, has a conference-worst .247 batting average and has only scored 159 runs. And the Texas pitchers will have to figure out a way to get through an Oklahoma lineup that has blasted 27 home runs this season.

Marlow said the players still feel optimistic about their position, with the end of the regular season a little over a month away.

“We’re halfway through the season, and I think we’re sitting just fine,” Marlow said. “I think this turns it around.”