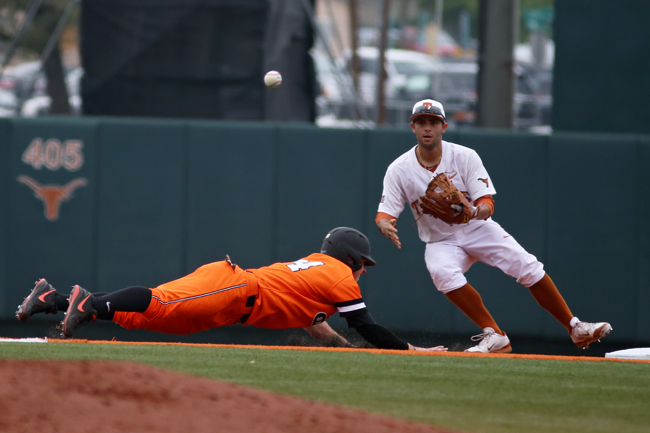 The conference saw two teams reach the semifinals of the College World Series, three play in the quarterfinals and four ranked in the top 10 of all four national polls at the end of the regular season.

But with the season well underway and the conference tournament just over a month away, only two Big 12 teams find themselves fulfilling national expectations.

The Horned Frogs are fueled by their pitching staff, which boasts a 1.98 ERA — the best in the nation.

They aren’t explosive offensively — as a team, the players have hit just nine home runs — but they are consistent. Senior outfielder Cody Jones leads the offensive production with a .347 batting average.

Oklahoma State (23–9, 7–2 Big 12) currently sits atop the conference and is No. 15 in Baseball America’s latest poll. The Cowboys have the nation’s seventh-best team ERA at 2.42 and lead the Big 12 in runs scored with 227. While Oklahoma State’s pitching is impressive, its offense is even better — just ask Oklahoma.

As previously mentioned, the game between the Cowboys and the Sooners displayed just how dominant the Cowboys offense can be. They didn’t just beat Oklahoma — they beat them down.

Behind a 20-hit effort, the Cowboys won with a final score of 24–2 in the nonconference matchup. It was the largest margin of victory in the history of the Bedlam series.

The loss ended the Sooners’ five-game win streak, which included a three-game sweep over conference opponent Kansas. Oklahoma (22–13, 6–3 Big 12) is currently tied for second in the Big 12 standings.

On a losing skid

Since its 2–1 series win over Kansas at the end of March, Texas Tech has lost four of its last five games. As a result, Texas Tech, which was ranked No. 19 last week, fell out of Baseball America’s weekly rankings this week.

Baseball America ranked the Red Raiders No. 5 in the preseason following their College World Series appearance, the first in program history. Tech returns 22 players from last season’s roster, including its entire starting infield, two starters in the outfield and eight pitchers who started games last season.

Texas snapped a seven-game losing streak, which included a sweep to Oklahoma State, with a win over Wichita State on Tuesday night.