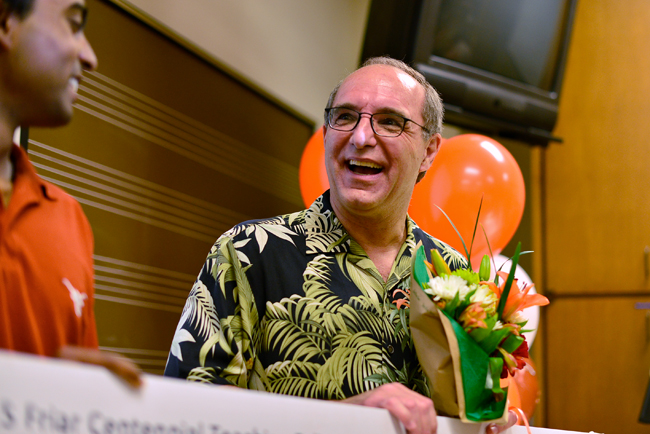 The Friar Society, the oldest honor society on campus, selected music professor Robert Duke as the recipient of the Friar Centennial Teaching Fellowship (FCTF) on Wednesday.

Each school year, the Friar Society asks the student body for nominations of professors they think are deserving of a $25,000 award from the society. Duke was one of 179 professors nominated by students this year.

Duke has taught at UT for 30 years. Currently, he is head of the Music and Human Learning program in the Butler School of Music and director of the Center for Music Learning.

Led by a trumpet player performing “The Eyes of Texas,” members of the Friar Society, former students, fellow professors and family members walked into Duke’s 10 a.m. class to present him the award.

“I have won a number of teaching awards on this campus, but this is the only one I’ve won that was presented in a room full of my students, and that makes this the best in the world,” Duke said when presented the award.

According to Nicole Kruijs, FCTF co-chair and public health and Plan II senior, the society selected Duke because he received multiple student and staff recommendations and demonstrated excellence as a professor.

“I reached out to some professors that I know, who I’d already known, and I asked them, ‘Hey, who deserves the award this year?’” Kruijs said. “They all pointed to Dr. Robert Duke. They all said he’s just incredible, [as are] the things he’s doing.”

Sai Gourisankar, FCTF co-chair and chemical engineering and Plan II senior, said he sat in on one of Duke’s classes to see his teaching firsthand before making the decision to present the award.

“He cares about his students deeply,” Gourisankar said. “He knows how to get across to students, and he’s invested in the undergraduate and graduate population.”

Duke said he is honored to receive the award, especially given its past recipients.

“What a wonderful thing,” Duke said. “I was surprised. The thing that’s nice about this is that the previous recipients of this award are all the people I respect most on this campus. And to be in their company is a real privilege.”

Music studies senior Courtney Ham, one of Duke’s current students, said Duke stands out among her other professors.

“I think that he’s really tenacious,” Ham said. “[He has us] think about how we can learn as individuals and how we can make other people learn.”