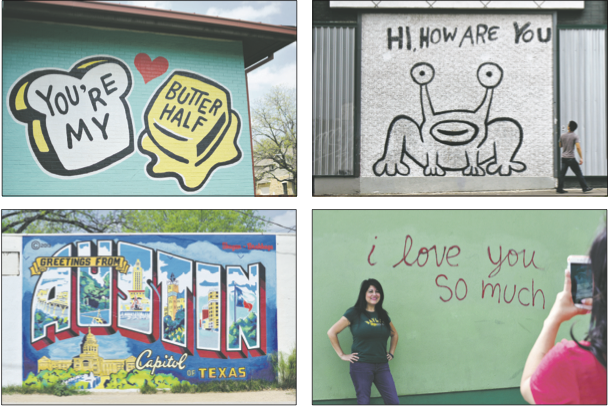 The city has no specific prevention methods to keep murals in Austin from being vandalized, but it invests significant funding to clean up graffiti when it occurs, according to city officials.

Carole Barasch, communications and community development manager of the Austin/Travis County Health and Human Services Department, said although the department has a hard time preventing graffiti, some murals are protected and preserved to a degree by a clear paint coating applied by the artists.

Artist Kerry Fitzgerald, known as Kerry Awn, painted the murals in the courtyard of 23rd Street and Guadalupe Street with two friends from the University’s art school in 1974. After the murals were seriously tagged with graffiti two years ago, security cameras were installed and the artists made repairs and applied the coating, Awn said.

“Supposedly [the murals are] sealed now,” Awn said. “You can take graffiti immediately and wash it off. It’s anti-graffiti coating, and there’s also cameras up there. There would have tapes if anyone did it. It’s a little better, they’ve got better lighting — they’re aware now that people will vandalize it if they can.”

While the Graffiti Abatement program removes much of the graffiti around Travis County, Awn and the other artists who originally painted the murals did the restoration work themselves after they raised $25,000 through a Kickstarter campaign, Awn said.

Awn said he realizes the danger of having artwork continually displayed in public, but said mural graffiti should still be considered vandalism.

“Vandalism is vandalism,” Awn said. “Just like you wouldn’t go to a statue and spray-paint a statue or something like that.”

Barasch said the Graffiti Abatement program received $516,219 from Austin’s 2014 budget to clean up graffiti around the city. The program, housed under the Austin/Travis County Health and Human Services Department, is the front line of graffiti removal in the city, Barasch said.

“There are two full-time crews that go out to all parts of Austin and Travis County to clean graffiti,” Barasch said. “Our department cleans the majority of graffiti, but we work closely with the Downtown Alliance cleaning crew, [and] there is also a cleaning crew from Downtown Austin Community Courts program.”

Barasch said the Graffiti Abatement program does not clean up pieces that are beloved by Austinites, such as the ‘Hi, How Are You?’ and ‘You’re My Butter Half’ murals, that may have started out as graffiti.

“There are certain graffiti, murals or what are considered iconic renderings that we steer away from that have kind of informally deemed iconic — like that ‘I love you’ one,” Barasch said. “So we don’t take that down. People have graffitied over it, but that is not something we would remove. Sometimes, it’s a judgment call. There are lovely murals around town, and we wouldn’t remove those.”

“It took an artist [hours] to paint a mural, to put in their time and dedication, and [they] thought out their image and brought this manifestation to a larger scale,” Wilson said. “Graffiti art is not as time-consuming. I feel like graffiti artists should find other areas.”