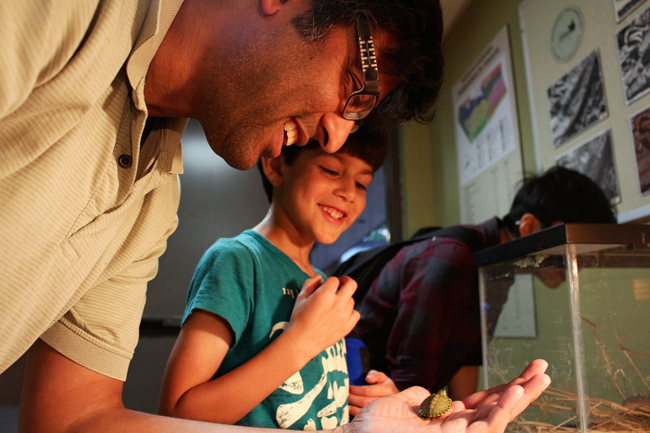 Most mice communicate at ultrasonic frequencies, so their nocturnal predators can’t hear them. Singing mice are an exception and have very lengthy, audible mating calls, according to a student researcher Thursday.

At the Science Under the Stars, an outreach graduate lecture series, Tracy Burkhard, ecology, evolution, and behavior graduate student, said singing mice have unusual vocalization compared to the rest of the rodent family. She said their calls are longer in duration and are audible to human and bird ears.

Burkhard said singing mice, which are awake during both the night and day, have different predators from other species of mice.

“If you’re a mouse, and you’re at night, and your main predator is a nocturnal avian predator who can’t hear in the ultrasonic, but you can, you will definitely be speaking in ultrasonic to one another,” Burkhard said. “It’s sort of like having a secret code that no one else can understand but you and your friends.”

Pygmy mice, the closest relative to singing mice, have very short, ultrasonic vocalizations mostly used in mating behavior, Burkhard said. She said she thinks that pygmy mice may be capable of making longer and more frequency-diverse calls but refrain from doing so because of fear of predation.

“Our hypothesis is that [pygmy mice] do enjoy long calls but they’re just afraid of predators hearing them,” Burkhard said. “We’re actually working on research now to see if that’s the case.”

Biology senior Kelly Garner said she works in the same lab as Burkhard and loves working with the mice — especially the process of trapping them.

“They’re a really interesting species, and they’re really adorable,” Garner said. “I helped [Burkhard] trap, and, right now, I’m working on the electrocardiogram experiment with her — which is, we’re trying to measure their heart rate noninvasively.”

Emily Rees, plant biology graduate student and organizer of Science Under the Stars, said the graduate-run organization hosts events to help graduate students feel more comfortable presenting and to engage with the community.

“It’s just a way to introduce the community to what we’re doing, as well since UT is such a big part of Austin — to kind of put ourselves out there, like this is some cool stuff that we’re doing right in your own backyard,” Rees said.