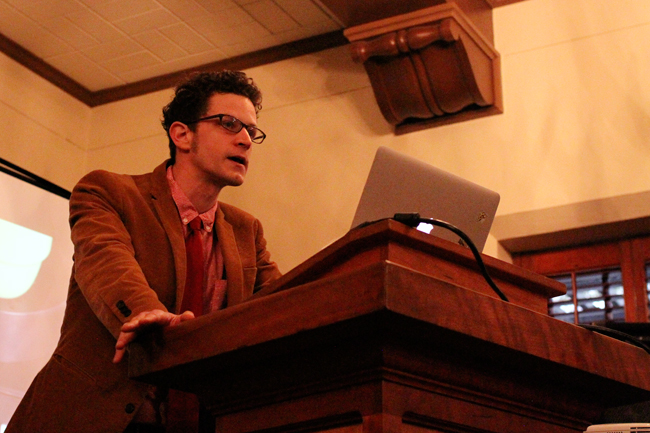 Internet surveillance is inevitable and sometimes beneficial, but use of informatiion gathered through servailance must be regulated, according to a lecturer Thursday at the 14th Annual sequels Symposium.

Jeremy Dean, a former education czar at Rap Genius, spoke about the benefits and dangers of internet surveillance the symposium, an annual event sponsored by the Ethnic and Third World Literatures specialization in the department of English. Rap Genius is a community-edited website, similar to Wikipedia, that allows users to annotate hip hop lyrics and other texts.

Internet surveillance can  be beneficial for companies because it can allow them to gather information about potential customers and adjust products to suit their needs, according to Dean.

“The surveillance and transformation of data into useful information is part of the revolution of the Internet,” Dean said.

However, Dean said Internet surveillance can also have negative effects, such as gathering personal information without an individual's consent. He compared the Internet to the Panopticon, a building designed so the interior of all rooms are visible from a single, central point.

“There is a line of state and corporate surveillance that we should resist,” Dean said.

Companies gather information from their users and are often able to sell this information to advertisers, according to Dean.

“The Internet tracks our every move as we browse their sites for free,” Dean said. “We are not the customers of Facebook; we are the product.”

“Companies such as Amazon organize information for us as they access information about us,” Dean said.

Jessica Egan, English graduate student and assistant instructor in the department of rhetoric, says she sees the possibility for learning as well as for harm.

“I think collaborative editing is exciting, productive and interesting,” Egan said. “But it is interesting to see the potential dark side of that. This surveillance culture is sort of feeding this capitalist system rather than being a way to challenge it,”

English graduate student Lauren Grewe said surveillance is a hot issue for some activists, but she does not see surveillance as a significant interference to her online activities.

“Online surveillance concerns me, but it doesn’t interrupt my life,” Grewe said.