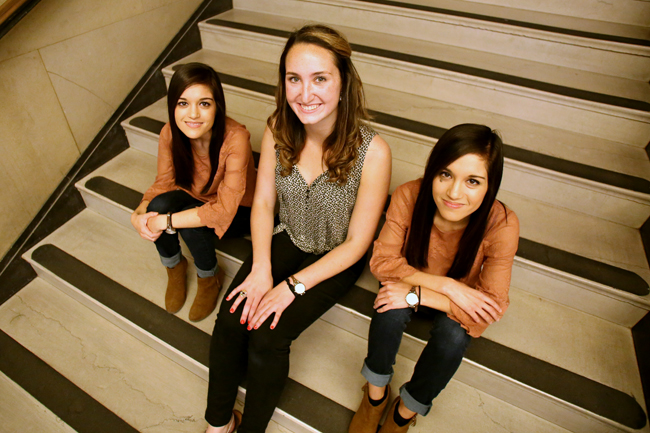 Public relations seniors Gabby and Allie Byers take the “identical” part of their status as identical twins seriously. The sisters share a Facebook profile and the same class schedule, and sometimes, they even dream in sync.

The twins’ unconventional relationship serves as the subject for MFA graduate student Shelby Hadden’s new documentary, “Her & Me.”

Last year, while perusing the Internet in search of a subject for her documentary, Hadden came across a Daily Texan article about the Byers twins. The identical twins choose to dress alike, share the same friends and schedule their entire lives together, including mealtimes and work shifts. Their story instantly intrigued Hadden, whose grandfather was also an identical twin.

“Everybody is fascinated by twins,” Hadden said. “People who aren’t twins want to know what it’s like. Everybody has a million questions.”

Hadden began filming her 15-minute documentary last September in hopes of providing some answers. She sought out interviews with sets of identical twins all over Austin. Hadden said she used interviews with the other twins in between scenes of the Byers to further explore issues of human connection, independence and family.

Although the Byers sisters said they occasionally face backlash for choosing to dress identically, they said they simply feel more comfortable living in sync. In the first two years of high school, the twins tried to lead separate lives, with different wardrobes and schedules, but they said it didn’t feel right.

“It may look kind of funny from the outside,” Allie said. “But once you start talking to us, we are super normal and sane.”

In an attempt to understand how and why the Byers sisters choose to live such closely paralleled lives, Hadden spent hours filming and researching. She filmed “little moments” — the twins playing mini golf with friends — and “big moments,” such as Thanksgiving with the Byers family. In order to capture the sisters’ more subtle moments of teamwork, Hadden filmed them picking their daily outfits and straightening the hard-to-reach parts of each other’s hair.

“It’s really amazing to be able to enter someone’s life and share their story,” Hadden said.

Hadden said she has been a documentary filmmaker since the fourth grade when she made her first film, “A Cat’s Life,” a comparison of the life of an indoor cat to an outdoor cat. She’s moved on to human subjects, but documentary work remains her passion because she said there is no predicting what will happen next.

”It’s a really fun process when you can’t anticipate the magic that you are going to find,” Hadden said. “You’re constantly learning.”

“Her & Me” was Hadden’s first experience working with a film crew. She said her director of photography and producer, MFA graduate student Tom Rosenberg and radio-television-film senior Avalon Gordon, respectively, helped ease this transition.

The crew began shooting in September and finished in December. “Her & Me,” fully funded from a successful Kickstarter campaign that wrapped up March 31, will premiere May 17 at the radio-television-film end-of-semester screening. Hadden said she plans to submit it to film festivals in the future.

After seeing the rough cut, the twins, who worried they weren’t interesting enough or that the film would portray them incorrectly, said “Her & Me” stays true to who they are.

“So far, people are reading it differently,” Hadden said. “It makes people look at their own relationships and ask themselves why they are so quick to judge [the twins].”