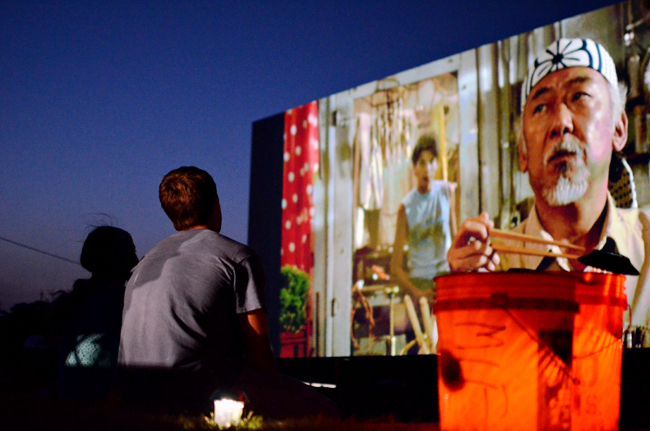 Combine a chicken coop, a community garden, permanent tents and a drive-in theater, and you get The Community First! Village — a master-planned community serving Austin’s homeless population.

In August of 2014, Alan Graham, founder of Mobile Loaves & Fishes, began construction of Community First! Village, an affordable, alternative housing community for the homeless. Graham partnered with other Austin business owners, including Alamo Drafthouse founder and CEO Tim League, to create a community of micro-homes, teepees and RVs located seven miles outside of Austin.

The community will offer a variety of amenities to residents, such as an outdoor movie theater and medical clinic. Mobile Loaves & Fishes mission workers will live in RVs and volunteer on the property. During high-capacity events in Austin, such as ACL and South By Southwest, the RVs will be marketed toward visitors as an alternative to hotels.

“We believe that Community First! is a movement that’s sparked here in Austin,” Graham said. “It’s a movement that says housing will never solve homelessness, but community will.”

Applicants for the program must be unaccompanied men or women who have a disabling condition and have been chronically homeless on the streets of Austin for over a year. Residents will pay between $180 to $210 to live in the fully furnished RVs, teepees and micro-homes.

Although Graham said the village will be open by early summer, the road to the opening has at times been rocky. Over the course of the last four years, the city put a halt on the planning process twice as a result of zoning issues and neighborhood conflicts. Some Austin citizens were reluctant about opening the homeless community in their neighborhoods, League said.

After League noticed Austin’s overwhelming homeless population during the construction of the Sixth Street Alamo Ritz, he reached out to Graham to help sway the neighbors.

“I was thinking, ‘What could we do to the project to turn the frown upside-down in terms of how neighborhoods react to putting something like this here?’” League said. “I was thinking about things that could be an asset to the community.”

In order to offer an amenity the whole community would appreciate, League donated an Alamo Drafthouse outdoor theater that screens free movies for the Community First! Village.

League asked Liz Lambert, founder of San Jose Hotel on South Congress, to contribute to the project because of her experience creating simple, commercially successful properties. Lambert designed the retro RVs, situated in front of the outdoor theater, which will double as rentable bed-and-breakfasts.

The clinic will offer physical and mental health screenings for residents and for anyone from the surrounding neighborhood. For the convenience of residents, Graham successfully lobbied to have city bus routes extended to the site.

League said he hopes the village will change the “not in my backyard” mentality people often have about homelessness.

“What [Graham] produced here — I think is really revolutionary,” League said. “If you look forward 25 years, something like this could be built in every southern, warm city in the U.S. and could make a phenomenal difference in a lot of people’s lives. It’s a far cry from a housing project.”