Texas softball faces off against Oklahoma in Big 12 battle 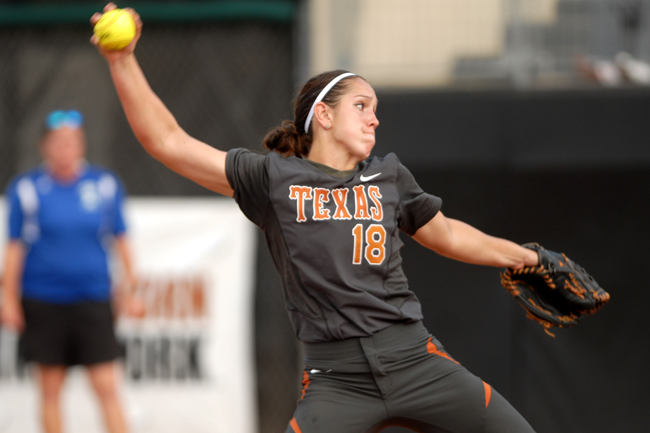 Texas and Oklahoma, the only Big 12 teams who haven’t lost a conference game this season, are both riding nine-game winning streaks — but that’s about to change.

This weekend at Red and Charline McCombs Field, the Longhorns (27–9, 3–0 Big 12) and Sooners (33–5, 6–0 Big 12) will challenge each other in a pivotal three-game series. The No. 18 Sooners and No. 20 Longhorns sit one and two in conference standings, respectively.

Oklahoma enters the series with the best offense in the conference, boasting a .385 team batting average to Texas’ fourth-best .318. The long ball is a major part of their game — the Sooners claim the Big 12 home run leaders in senior pitcher and shortstop Shelby Pendley (19) and senior first baseman Lauren Chamberlain (16). Pendley and Chamberlain are two of 26 finalists for the 2015 USA Softball Collegiate Player of the Year award.

Senior pitcher Gabby Smith said Texas’ pitching staff, which has the third-best team ERA (3.10) in the conference, won’t let Oklahoma’s power hitters get in their heads.

Offensively, the Longhorns want to rely on the consistency they get from hitters such as sophomore shortstop Devon Tunning, who currently owns a 21-game on-base streak and has a .571 on-base percentage.

“She’s a tremendous offensive weapon,” head coach Kristen Clark said. “She really has taken ownership of the leadoff spot. She’s the hot hand and has a great eye and is really coming into her own.”

Although she said she feels good about her recent offensive success, Tunning said she’s also excited about Texas’ defense.

Early in the season the Longhorns struggled with defensive miscues while moving the infield around. The team committed 28 errors through the first 18 games. In the past 18 contests, since finalizing the defense, Texas has committed just nine errors.

“At the beginning of the year, we were working through things; there was no set lineup, so we were trying to figure out who’s going to be where,” Tunning said. “Right now, I think we know who’s going to be out there, and the communication is solid. We have good chemistry.”

That chemistry allows Texas enter this weekend with confidence despite struggling against Oklahoma in recent years. Since 2009, the Sooners have won nine of 15 meetings in the Red River Rivalry.

“We have a big weekend coming up, and we’re going into it confident,” Tunning said. “Our whole motto this year has been a championship mindset, and we’re taking that into this series.”