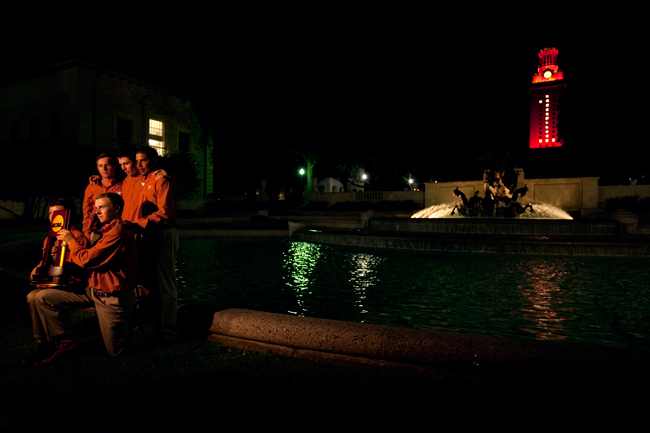 The mens golf team poses with their trophy in front of the tower Saturday night. The tower was lit in honor of their NCAA Championship win.

Jordan Spieth has much in common with the average UT student. The former Longhorn, who attended the University from 2011–2012, calls Dallas home, avidly roots for the Cowboys, and celebrated his 21st birthday in July.

But on Sunday, Spieth made history, trading in his burnt orange for a green jacket and joining a slightly more prestigious club.

Spieth won the 2015 Masters Tournament with a score of 18-under par, tying a record set by Tiger Woods in 1997. Spieth is the fifth player in history to lead the tournament from start to finish and the first wire-to-wire champion since Raymond Floyd in 1976.

It was a record-breaking weekend for Spieth, who set the Masters record for lowest score through 36 holes (-14) and 54 holes (-16) and tied the 72-hole score record (-18). Additionally, he broke Phil Mickelson’s record for most birdies at the Masters with 28 and became the first person to reach 19-under par at Augusta. Spieth is also among the youngest winners of the tournament, barely older than Woods was when he won almost two decades ago.

CBS anchor Jim Nantz called Spieth’s Masters showing “one of the epic performances in the history of the sport,” claiming that “a new era has arrived.”

It is undeniable that Spieth’s success at such a young age rivals only that of four-time Masters champion Woods. It’s been nearly two decades since Woods arrived on the scene and revived the sport in the late 1990s. With his classic good looks, southern charm and rare ability to play golf nearly perfectly, Spieth is well on his way to reigniting golf’s waning popularity.

“It’s truly inspiring to see the type of things you can accomplish by putting in hard work, especially when they are done by a guy as nice and humble as Jordan,” said Connor Bush, mechanical engineering junior and a former high school classmate of Spieth’s. “It’s crazy to think that someone I used to walk by in the halls every day is going on to accomplish such incredible feats.”

Incredible feats they are. This marks Spieth’s third win on the PGA Tour. Following this Masters win, he will rise to No. 2 in the world.

“What a week and day for Jordan,” said Ryan Murphy, former Texas men’s golf assistant coach. “He’s a very special young man, and I feel fortunate to have had the opportunity to coach and be around him during his time at Texas. His winning the Masters does not surprise me. He’s as strong mentally as any young person that I have been around. It is a great day for the Spieth family as well as the Longhorn family.”