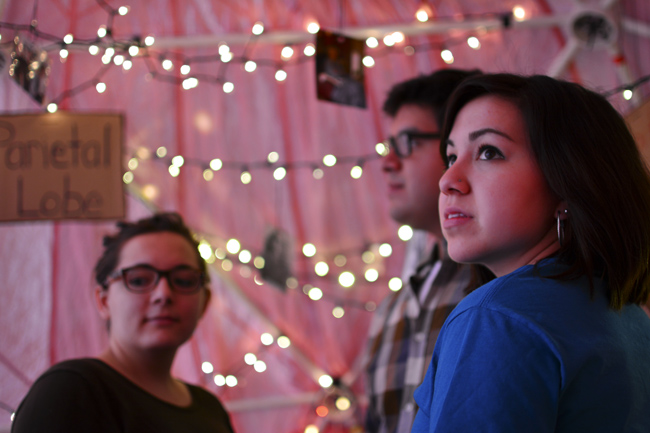 Imagine seeing your shoelace untied and not knowing how to tie it. Imagine seeing your daughter’s face but not remembering her name. Three UT students are exploring these issues with a an interactive art installation called “Eye See … I Forget.”

“Eye See … I Forget,” resembles a giant brain made of a 2V geodesic dome covered with a pink parachute. Guests can crawl inside the brain, interact with artistically depicted neurons and examine family pictures and props representing various brain functions.

The team received help from a fellow classmate, theatre and dance freshman Dack Justiz, and dedicated the installation to Justiz’s grandmother, Frances Nicholson, who has Alzheimer’s. Before walking into the installation, visitors watch an introductory interview taken of Nicholson and her family. The video provides context for visitors so that they can better understand what they will experience inside the structure.

“I look forward to my grandmother’s story being shared,” Justiz said. “My family has been very open about the process in hopes that anyone dealing with a family member with this disease knows they’re not alone.”

Over the course of the installation’s five-day run, the internal structure of the brain will feature different videos and content. The team intends for these content changes to represent the seven stages of Alzheimer’s disease, as patients begin with “no impairment” and progressively lose the ability to control movement or respond to the surrounding environment.

The team physically constructed the piece over the course of the last several months, transporting all the materials and visited Nicholson in Houston to interview her about her experience with Alzheimer’s. Hacker said these experiences taught them the importance of organization, communication and honesty.

“We faced so many challenges but have worked so hard,” Hacker said. “It still surprises me that we will succeed.”

Rosales said her participation in the project was largely inspired by her grandmother, who passed away two years ago after suffering from Alzheimer’s disease. Rosales said conducting research about an Alzheimer’s patient’s brain with the team helped her understand what her grandmother went through in the last years of her life.

Rosales said she is hopeful that the project, the result of so much research, will inspire people who visit to research and learn more about Alzheimer’s disease.

“That’s really what I wanted to get out of the project: to advocate for Alzheimer’s awareness,” Rosales said. “That’s been the biggest reward so far.”

Hacker said the team wants the audience to leave the exhibit with newfound respect for Alzheimer’s patients and their families. She hopes they feel gratitude for the little things in life that Alzheimer’s disease takes away.

“I hope above all that our audiences will see the show in its entirety every day of the festival,” Hacker said. “Just 10 minutes of your day for five days — that’s all I want.”

“Eye See … I Forget” is part of the Cohen New Works Festival presented by Broadway Bank. The festival is a biennial, week-long showcase of student artwork, plays and interactives held in various locations around campus Monday through Friday.