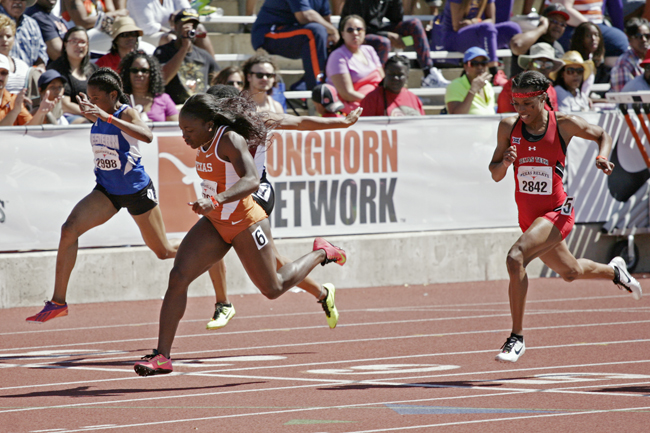 For the second time in less than a month, Texas played host to another invitational track meet, holding the Texas Invitational over the weekend. Texas came away victorious in another event in a season that’s already yielded significant success.

The running events began Saturday morning with a title for the women’s 4×100-meter relay team, which ran in a season-best 43.61 seconds en route to the win for the Longhorns. The men’s and women’s teams would combine for 12 more titles.

Junior Katie Burford took the title in the 1500 meters, while senior Blake Williams and freshman Logan Emery finished 1–2 in the men’s section of the event.

As the meet came to a close, junior Morolake Akinosun grabbed one of the bigger titles for the team, taking out Olympic gold medalist Natasha Hastings in the 200 meters with a time of 22.70, a new Mike A. Myers stadium record.

The final standings of the meet had the women edging out California State University-Northridge by 32 points for the win. The men also dominated the competition, beating second-place Minnesota by a full 90 points.

The No. 4-ranked women and No. 6-ranked men will tackle the Michael Johnson Invitational next weekend in Waco.

In sunny and warm Tempe, Arizona, the Texas women’s golf team competed among the best this past weekend at the Ping/ASU Invitational and captured a seventh-place finish in the process.

On the ASU Karsten Golf Course, Texas senior Bertine Strauss, March’s Big 12 Golfer of the Month, tied for first place with a three-round score of 210 (-6). Strauss’ first-place finish was her third top-five finish in a row, and her most impressive, as she was in a field among 10 of the top 20 players in the nation.

In a tournament in which the Longhorns played against the top five nationally ranked teams, their seventh-place finish and 873 (+9) score represent their best effort of the season against top competition. Arizona, which tallied a score of 861 (-3), earned a first-place finish.

The next tournament for the Longhorns is the Big 12 Conference Championship at The Dominion Country Club in San Antonio from April 24–26.

The Longhorns return to Austin after a 4–0 shutout loss to Baylor over the weekend.

In its final road game of the regular season, Texas failed to take a single set away from the Bears.

The first doubles match ended swiftly in Baylor’s advantage, as the Bears’ No. 30 sophomore Blair Shankle and No. 85 junior Kiah Generette posted a 6–1 win over Texas junior Neda Koprcina and sophomore Ratnika Batra. But at the No. 1 doubles spot, the Texas duo of No. 48 junior Breaunna Addison and senior Lina Padegimaite made it difficult for Baylor to take the lead. Baylor’s No. 31 senior Ema Burgic and freshman Theresa Van Zyl trailed the pair, 5–4, but held on for the last three games, eventually taking the doubles point in their 7–5 match victory.

Singles looked promising for the Longhorns despite an initial loss by freshman Dani Wagland in No. 6 singles. With leads on both courts two and three, Koprcina and Batra battled their Baylor counterparts to try to put points on the board for Texas. Baylor finished out strong in the last halves of its sets, with Generette defeating Koprcina, 7–5, 6–3, and Shankle posting a 7–5, 6–4 victory over Batra.

The Longhorns’ home match Tuesday against St. Edward’s was canceled and will not be rescheduled.