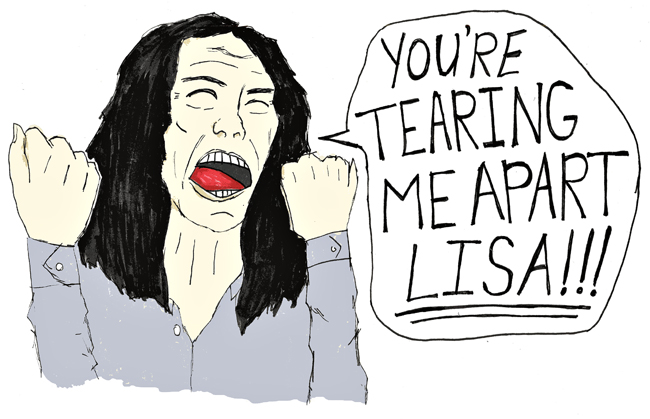 During the Texas Travesty’s screening of the cult classic movie "The Room," audience members will chunk plastic spoons at the screen, participate in a costume contest and openly crack jokes.

The satirical news organization will host its second annual screening of the so-bad-it’s-good masterpiece “The Room” on Tuesday. The film follows a romantic triangle between a man named Johnny, his fiancée, Lisa, and his best friend, Mark. Subplots involving many of Johnny's friends unfold, but several are disappear or go nowhere.

In one scene, Lisa’s mother reveals she has breast cancer, and the detail is never brought up again. The film is notorious for its terrible acting, inconsistent storyline and cringe-worthy dialogue. Entertainment Weekly labeled it “the ‘Citizen Kane’ of bad movies.”

Radio-television-film senior Marshall Kistner, who organized the screening, said he’s excited to give fans of the bizarre drama an opportunity to get together for a night of hilarity.

“My hope whenever someone goes to a wide screening of this movie is that they have the same experience I had,” Kistner said. “If you go in with an open mind and see the true absurdity and passion that’s put into it, it’s almost weirdly inspiring.”

Shortly after the film’s 2003 release, it developed a cult following. The horrible script and director Tommy Wiseau’s bizarre acting made the movie a comedy gem. More than a decade later, fans still attend several nationwide midnight screenings where they dress up as the characters, reenact scenes and openly mock the film.

Communication sciences and disorders sophomore Taylor Boswell first saw “The Room” during her freshman year. She said she is excited to attend the screening and relive the insanity.

“You don’t think a movie can be done that badly but still be good at the same time,” Boswell said. “It’s just interesting that [Wiseau] created this horrible movie that he, to this day, thinks is a piece of cinematic gold.”

A majority of the interest surrounding the film centers on Wiseau and his flamboyant personality. He is famous for his broken English — although he claims he grew up in Louisiana — and his odd mannerisms, such as his affinity for always wearing sunglasses, even at night.

When Kistner contacted the film’s official email asking for permission to screen the film in Austin, he never expected the director himself to respond.

“He gave us [the film rights for the screening] for free for Christmas,” Kistner said. “He kept calling me ‘Marhal.’ He also sent us a package of his official underwear line and wanted us to show them off at the first screening.”

Despite its status as cult hit, a large, growing fan-base will surely immortalize the film as a memorable look at how filmmaking can go wrong. Boswell said the film will continue to get recognition for years to come, similar to cult hit “The Rocky Horror Picture Show” today.

“I think it can still be viewed by generations to come,” said Boswell. “I think everyone should see ‘The Room’ at least once in a lifetime.”

What: Screening of “The Room”