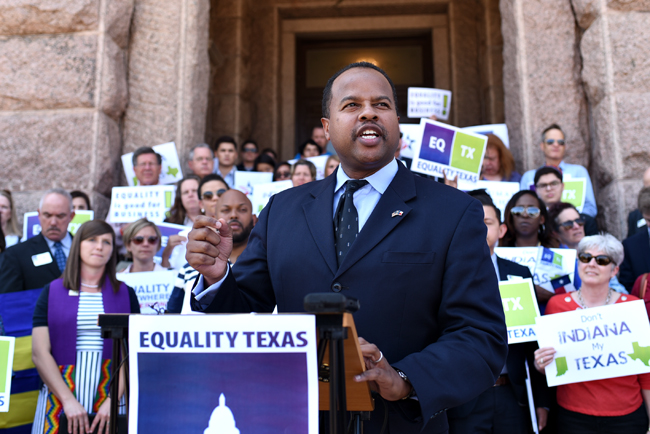 With signs reading “Don’t Indiana My Texas” in hand, more than 100 people rallied outside the Capitol for Freedom Advocacy Day to lobby against certain anti-LGBT measures proposed this legislative session.

This session, bills have been filed in the House and Senate that, if passed, opponents say would limit rights for the samesex community.

English and biology junior Laura Tanter and Middle Eastern studies senior Julian Munoz Villarreal, representing UT’s chapter of the Texas Freedom Network and advocating against such legislation, were among the crowd at the Capitol.

“As a queer person myself, these issues are really personal for me,” Munoz Villarreal said. “They impact me personally. They impact people I know personally and in a lot of ways. I’m really just passionate about trying to create a more equal world for my friends around me for future generations.”

Tanter said policies she and other rally attendees plan to oppose include limitations on bathroom usage for transgender students, the alteration of Texas’ religious freedom restoration act and restrictions on the freedom to marry.

Texas currently has a religious freedom act, but Tanter said certain legislators would like to add measures that could prevent service to individuals, including the LGBT community, based on religious grounds.

“They are trying to amend it so that individuals and businesses can discriminate against whoever they want to if they can claim it’s a religious burden against them,” Tanter said.

“When we humanize policy, we create good policy,” Gonzalez said. “When we disconnect it from people’s lives, we negatively impact people’s lives. … I know sometimes they are extremely personal, but today is a day to be brave, to share, to not let people not recognize the negative consequences of these laws.”

“When I see that, in 2015, right here in Texas, we are still discriminating, not based on race or color — we’re discriminating based on sexual orientation and gender identity, and that, ladies and gentleman, is dead wrong,” Reynolds said.