Support for BDS is support for justice and open dialogue 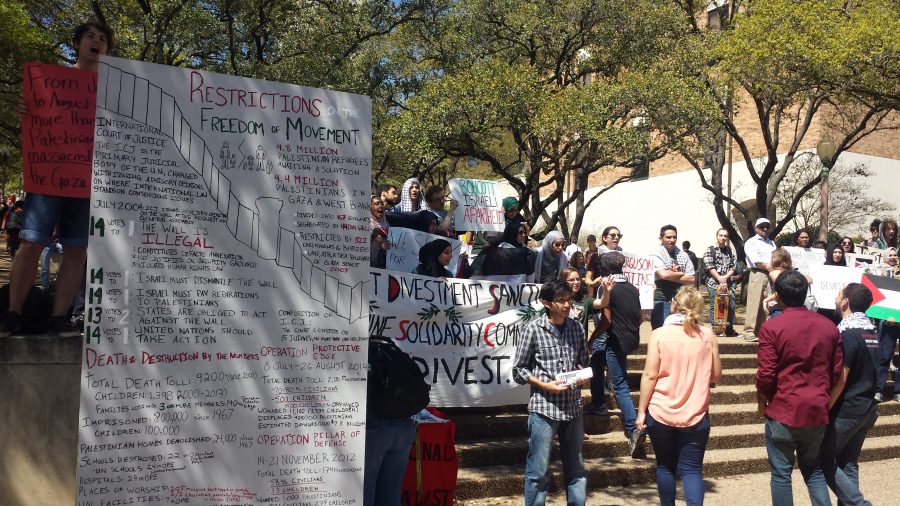 Editor's Note: The Texan received this piece around the same time as Walker Fountain's piece. They are not intended to be read as a point/counterpoint.

In February, Harvard University’s Hillel center for Jewish students co-sponsored a civil rights panel on “Selma to Ferguson” which included Jewish civil rights veteran Dorothy Zellner. Zellner is also an unapologetic supporter of the Palestinian people and their call for a Boycott, Divestment, and Sanctions (BDS) movement to end the Israeli occupation of Palestine. This caused confusion, however, because Hillel International (which I’ll call “International”) disallows engagement with individuals or entities which support BDS or “demonize” Israel.

International typically requires its chapters to react far more sharply to undogmatic speakers. In January of 2014, the Hillel chapter at UC Santa Barbara rescinded its invitation for Jewish author David Harris-Gershon to speak on his book about reconciliation between Israelis and Palestinians. Harris-Gershon committed the sin of backing the BDS movement (though he still supports the two-state solution), so Hillel decided his presence would lead to a “hurtful distraction.”

Shortly after the Harvard panel, Zellner and other civil rights veterans were barred from speaking at Hillel chapters at UMass Amherst and MIT. Just last month, the Hillel chapter at Swarthmore College in Pennsylvania decided to host Zellner and others on a panel and was threatened with legal action by International.

International stated that the panel would be acceptable so long as the discussion was restricted to American civil rights and did not take up BDS and the occupation of Palestine. At Harvard, Zellner explained the problem with this perspective: Her support for BDS is simply a continuation of “the work that I learned from black people” in the civil rights movement. International’s standards thus cause a serious contradiction for civil rights activists and their underlying principle of justice.

The Swarthmore Hillel realized this contradiction in December of 2013 and made a choice to err on the side of justice, passing a resolution to “become an Open Hillel.” They charged International with trying to present a “monolithic face” which does not represent American Jewish diversity, falsely equating Israel with Judaism and generally obstructing open discussion with its restrictive standards.

The legal threats by International have culminated in Swarthmore Hillel’s effective expulsion from the organization. Open Hillel has since become a larger movement of Jewish students who believe that dialogue with Palestinians and anti-Zionist Jews is important and should not be subject to International’s authority.

Justice-minded students at UT Austin now have a similar choice to make. The Palestine Solidarity Committee has formed the UTDivest coalition, which calls on UT to end its multimillion dollar investments in corporations that facilitate the Israeli occupation of Palestine.

They hope to pass such a resolution in Student Government and demonstrate student support through a petition. Of course, International is against such activism and so the Texas Hillel chapter is campaigning against UTDivest for its similarity to the BDS movement. They have formed a “Unify Texas” campaign which, on its Facebook page, calls for “open dialogue” and “peace and justice.” They do not provide any alternatives to BDS. They do not mention Texas Hillel and did not answer repeated requests from the author to publicly or privately clarify their relationship.

That relationship is incredibly important for understanding Unify Texas, as outlined in an anti-BDS email that Texas Hillel circulated. Even while acknowledging that some of its members “struggle with some of Israel’s policies,” Hillel advocates International’s standards of restriction and states that its members “must speak with one voice,” particularly a pro-Israel and anti-BDS voice. The unity and open dialogue that Unify Texas is calling for is a sham, as it rests on a core of restrictive standards and official dogma.

Moreover, as UTDivest supporter and SG representative Mohammed Nabulsi explained to The Daily Texan, the first prerequisite of open dialogue is justice. Nabulsi explains that “BDS is a step toward leveling the negotiating playing field so that the Israeli government is forced to take Palestinian demands seriously.”

PSC has consistently followed this standard of open and just debate, having recently hosted public demonstrations and events to discuss Palestine and BDS when their criticisms of Texas Hillel were ignored or deleted. They will host yet another public forum Wednesday to discuss UTDivest and BDS with the UT community before their SG resolution is voted on next week.

Students who actually care about justice should stand with movements like Open Hillel, UTDivest and BDS. This is not simply a “foreign policy squabble”, as the Texan editorial board wrongly framed it.

Those who stand against justice on the basis of “open dialogue” are not only paradoxical, but also on the wrong side of history. We should all reread Martin Luther King Jr.’s famous Birmingham letter in which he rejects the deception of white liberal calls for patience and unity, because freedom “must be demanded by the oppressed.” Do not forget that King himself was a striking point of disunity, having been overwhelmingly hated by white America and sabotaged by the federal government for his radical allegiance to justice.

We should honestly consider the statements on Palestine by South African anti-apartheid leaders such as Nelson Mandela, who stated that “we know too well that our freedom is incomplete without the freedom of the Palestinians.” Do not forget that Mandela was considered to be a terrorist by the United States for decades. Justice is justice even if it goes against the will of power, and all peoples deserve it, including the Palestinians.

Rathi is a computer science honors junior from Austin.