Texas searches for wins as losses pile up 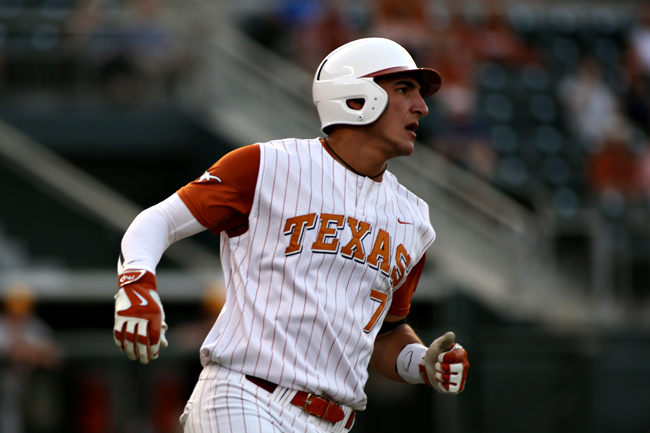 After a 3–2 loss to Oklahoma, in which the Longhorns had 11 hits but only scored twice, Johnson’s message was simple. “You got to do better,” said Johnson.

“You got to convert and take quality at-bats in timely situations,” head coach Augie Garrido said. “That’s really the problem. Last series at Oklahoma State, they had 17 RBIs, and we had five. It’s about RBIs.”

While the players were frustrated with the lack of clutch hitting, Garrido was upset about the many losses the team has accumulated. The Longhorns have lost nine of their last 11 games — five of the last six conference games — and they have fallen from first to fifth place in the Big 12.

“[This weekend] was more frustrating because the losses are piling up,” Garrido said. “If you look at it, you know that’s what it’s about. … It’s just the number of losses that are frustrating.”

Although the losses have been frustrating, Cantu said the team needs to keep grinding and focusing on one game at a time.

“We just need to stay focused and composed,” Cantu said. “Baseball is a frustrating game, and it’s just how you react to it and keep rolling.”

Texas (19–17, 6–6 Big 12) will look to have a positive reaction to Johnson’s postgame comments when it takes on Sam Houston State (19–19) Tuesday night at UFCU Disch-Falk Field.

The Bearkats enter the game on a five-game winning streak, including a three-game sweep of Incarnate Word, a team the Longhorns defeated, 7–1, on March 10.

With Sam Houston State in town, Texas will try to get back on track. With a little over a month of baseball remaining, Garrido said the team is in danger of failing and missing out on its goal of a return trip to the College World Series.