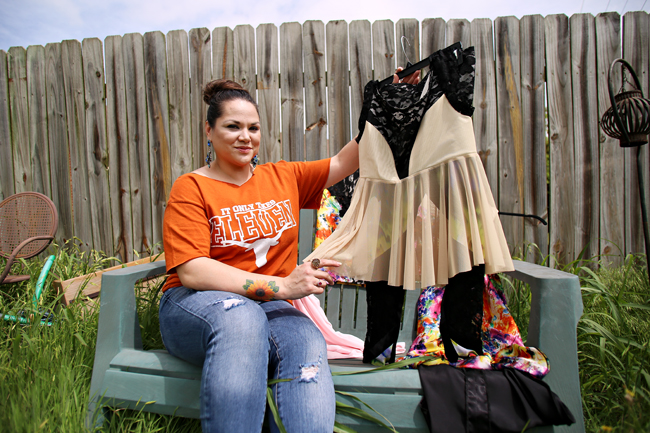 Fashion designer and UT alumna Dina Chavez thinks women shouldn’t have to choose between sexy and modest or professional and sporty. They should have it all.

Chavez’s Austin-based brand, SixChel, launched in 2011 and has participated in Austin Fashion Week since 2009. This year, Chavez will show three formal looks at AFW’s finale Saturday. Her pieces are a part  of the capsule collection, which highlights local designers who primarily do custom work.

This year’s AFW will be Chavez’s first time reintroducing herself into the local fashion scene since taking time off after her sister’s cancer diagnosis. Her sister died two years ago, and Dina is now helping raise her nephew while running SixChel.

“I had to disappear for a while, but I feel like this is my comeback,” Chavez said. “I feel like it’s more meaningful for me this time.”

Chavez earned a degree in costume design from UT in the early 2000s. She said she continues to use techniques she learned in school, including making patterns and conducting fittings, in her professional career. She said the current fashion design program has grown since she left, and it now plays a vital role in AFW.

“The school used to be really small, and now it’s a staple of the fashion industry in Austin,” Chavez said.

Chavez designs, manufactures and sells all of SixChel’s clothing herself. Chavez said she uses black as a staple color in her garments because it represents the modern, city-chic look she wants for SixChel.

“I think women today are sporty, classy, sexy, conservative — we can be all these things all at the same time,” Chavez said.

She said she wants to ensure her designs allow women to express themselves as professionals and leaders.

“I feel like our independence is being taken away from us again,” Chavez said. “When a woman chooses to be a powerful woman and be an independent woman, she can display that in her clothes.”

AFW founder Matt Swinney has worked with Chavez since the event’s launch six years ago. Swinney said Chavez’s custom designs fit many different body types and have a distinctive Austin edge about them.

“She designs for very real women,” Swinney said. “She’s not necessarily creating samples for size-two models all the time.”

AFW will debut 10 capsule collections at the finale this year, and Chavez said AFW attendees are looking for custom designs that have an Austin vibe.

“People come from out of town looking for handmade items from Austin,” Chavez said. “I always felt that no matter how you wanted to dress, it was acceptable in Austin.”

Swinney said the capsule collection portion of the finale is an opportunity for designers who don’t have as large or as traditional of a collection to gain exposure by showcasing some of their work.

“We really wanted to embrace that designer who works in a different way,” Swinney said. “Somebody like [Chavez], who only creates one-off pieces, who still wants to have their brand out there.”