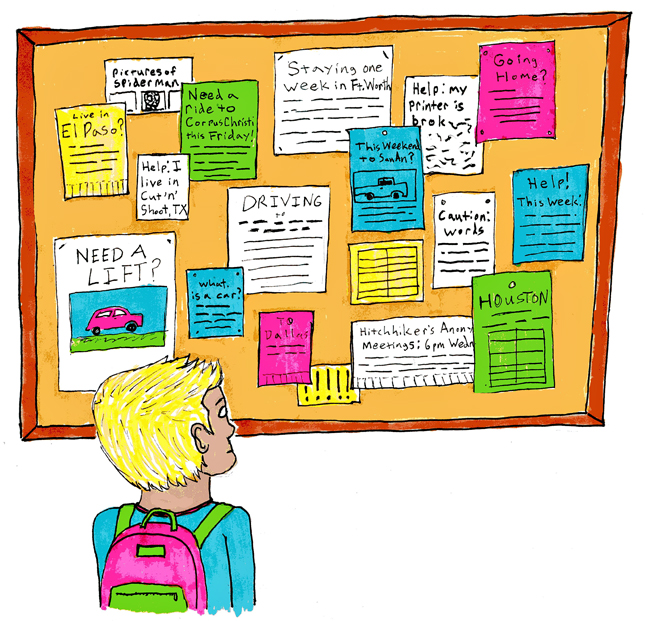 As students without cars prepare to head home for the weekends or holiday breaks, many turn to UT Facebook groups, asking to tag along with people on their journeys home. Posts such as “Is anyone going to Dallas this weekend? Will pay for gas!” often flood students’ Newsfeeds.

Students have been discovering new ways to find convenient and inexpensive transportation for decades. According to an article published in The Daily Texan on Feb. 10, 1972, students in the 1970s filled bulletin boards and dorm walls with ride requests.

In the article, reporter Jamie Carter described how the Alpha Phi Omega service fraternity set up “rider boards” in the second-floor lobby of the Union and the lobby of Jester Center. The service fraternity mounted maps of the United States on the walls and separated them into 14 sections.

Students seeking transportation to anywhere in the U.S. filled out white tags with their names, destinations and phone numbers and placed them on the map. Drivers could browse the board and contact prospective passengers or fill out separate orange cards to advertise rides.

“Will help with gas and driving,” one note read. “I will also provide amusement and conversation, free of charge.”

A student requesting a ride to Virginia said he needed “to take much stuff. Hope you have a van or station wagon,” according to the article.

Ride-givers who filled out cards had their own offers and requests. According to the article, a driver named Paul wrote, “I love women,” and promised to “play guitar and sing.” One male student simply wrote that he “would like any female” to join him for spring break in Midland.

Giving rides to complete strangers gave some students apprehensions, according to the article. While students today can creep through people’s Facebook profiles before accepting or offering rides, this wasn’t an option back then. One student, Barbara Thornton, who offered to drive passengers to California, expressed her safety concerns about the system in the article.

“It’s kind of a risky thing,” Thornton said in the article. “You don’t get to see their faces until they ride with you.”

Students criticized the system when the boards eventually became overcrowded and not enough needs were being met. One student put a note on the board pointing out the system’s flaws.

“The cards become stacked so thick that those on the bottom of the pile have no chance of getting rides,” the student wrote. “Chance determines who gets a ride. I come back and put my card on the top of the stack every day.”

Facebook groups and other transportation options, such as Megabus, Uber and Lyft, have eliminated the need for rider boards, but students today still feel the urge to head home every now and then. One rider board participant summed up this desire in a note she posted.

“Whenever you’re going to my hometown, please call,” the woman wrote. “I would like to get there sometime this semester.”