As softball season wraps up, Texas’ deep bench will be crucial 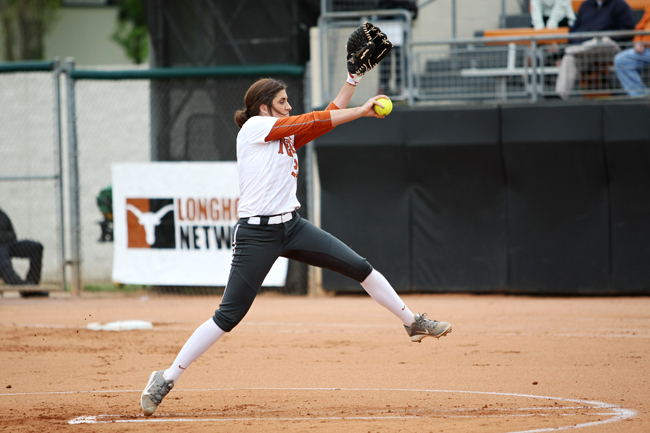 Connie Clark has been Texas’ head softball coach for a long time.

Actually, she’s the only head coach the 19-year-old program has ever had. With five Women’s College World Series appearances and three Big 12 Conference Coach of the Year awards under her belt, it’s safe to say the coach knows how to put a team together.

She’s also acutely aware of the importance of the athletes who aren’t in the spotlight.

“We actually tab anybody that’s not a starter as a difference maker,” Connie said. “Whether it’s because of attitude, the energy they bring or being somebody that you can pencil in to enter a tough situation — they’re difference makers for a reason.”

This season, a few solid difference makers have emerged from Texas’ bullpen.

Sophomore pitcher Lauren Slatten and freshman pitcher Kristen Clark have pitched in 19 games combined this season, with just five starts between them. Slatten currently boasts a 2–0 record while Kristen maintains a 3–1 record, and they both have a save credited to them.

Kristen has found success in the middle of troubling situations. In the conference series against Kansas in late March, she pitched a total of 5.2 innings of relief and gave up just one run. She collected five strikeouts, including one against the Jayhawks’ best hitter, junior Chaley Brickey, to escape a bases-loaded situation and secure the Texas victory. In Texas’ next game against Houston, Kristen pitched four innings of relief and worked around scoring situations again.

“I’m starting to call her ‘Ice Water,’” Connie said of her hurler. “She’s seen some challenging moments, and you can’t teach those, so it’s great seeing her go through them and do so well.”

Texas will look to get its bench some playing time as the Longhorns (28–12, 3–3 Big 12) face Iowa State this weekend in a three-game conference series. Although the Cyclones (20–17, 1–5) currently sit at the bottom of the Big 12 standings, they have some power hitters in their lineup.

With only conference matchups remaining on the regular season schedule, Texas’ roster depth will be especially important.

“It makes a big difference,” Connie said. “It’s nice to be able to turn to a deep bench and get some production.”