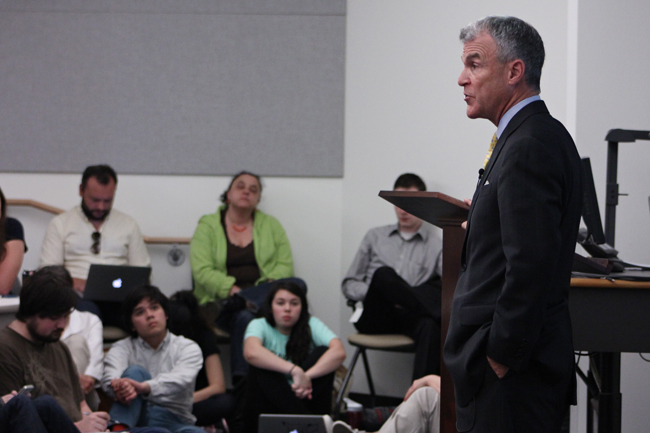 The United States undermined Afghanistan’s independence by taking the leading role in the fight against the Taliban, according to former CIA agent Robert Grenier.

“After 2005, we as a government made a very serious mistake,” Grenier said. “We decided in effect that Afghanistan was too important to [leave to] the whims of Afghans.”

Grenier spoke at a campus event hosted by the Robert S. Strauss Center for International Security and Law and the Clements Center for History, Strategy and Statecraft on Thursday to promote new his book, “88 Days to Kandahar.”

Grenier served as a senior CIA counterterrorism official until he was dismissed by former CIA director Porter Goss in 2006.

“We completely overwhelmed this very small, very primitive, agrarian country with a tiny GDP and, at best, nascent national institutions,” Grenier said. “We should have known and quickly learned that the successes we had [and] the progress we were able to make was progress that couldn’t be sustained by Afghans over the long term.”

Contingent forces are necessary in Afghanistan to ensure that Afghanistan’s government can transition to peace, Grenier said.

“If the Taliban … control substantial parts of the country, we’re to help the government to sort that out,” Grenier said.

According to Grenier, given the weak leadership from Hamid Karzai, former president of Afghanistan, the country’s fate was entirely determined by the United States and the Taliban.

“He was an admirable fellow in a lot of respects, but also kind of unsteady,” Grenier said. “By the end, it was just hopeless.”

“Given the tremendous institutional knowledge that we have about Afghanistan, we are in a great position to make positive effects within that area,” McNally said. “It comes to helping the good people and hurting the bad people.”

“I think it was really interesting that he was the one who formulated that plan,” Michaels said. “The U.S., just as a support system for the Afghan people, is a really important part of the plan of support — without taking over [Afghanistan].”