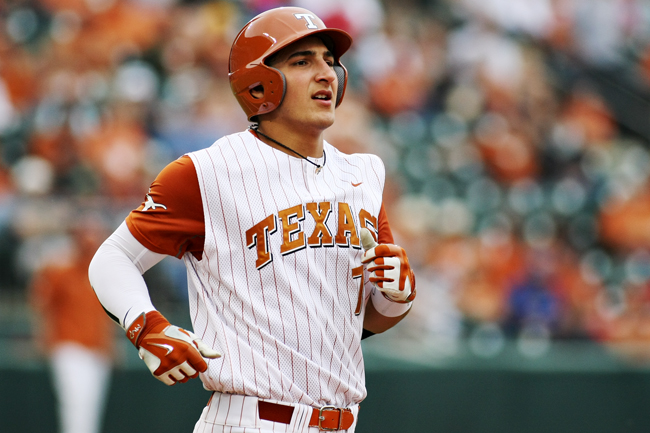 Trying to steal a base against freshman catcher Michael Cantu isn’t an easy task.

The feat proved especially challenging Saturday, as Cantu displayed his defensive prowess against Oklahoma. In the sixth inning, a Sooner runner tried to steal second, but the freshman made a phenomenal off-balanced throw from his knees to senior second baseman Brooks Marlow for an inning-ending out. He followed that with another equally impressive throw from his knees to freshman shortstop Joe Baker later in the game.

“Cantu did a great job throwing people out at the plate,” sophomore pitcher Kacy Clemens said after the game.

Cantu, a Corpus Christi native, has thrown out seven runners attempting to steal on him this season. He’s hitting .265 on the season and is tied for third in the Big 12 in walks with 25. The 6-foot-3, 237-pound catcher has been a bright spot throughout the season — especially when the team overall is struggling.

Although Texas dropped two out of three against the Sooners, Cantu hit .500 and drew three walks. Head coach Augie Garrido said he was impressed with Cantu’s play.

“He threw out every runner that tried to run on him,” Garrido said. “He was a very mature baseball player. If we could get everybody particularly on offense competing the way he competes — they certainly have a leader and a model to follow in him.”

Cantu came to the team with high accolades. Before coming to college, he was ranked the No. 1 catcher in the state by Perfect Game USA. Perfect Game USA also named him an underclass second-team All-American in 2013 and a third-team All-American in 2014. The Texas Sports Writers Association named him a first-team all-state catcher in 2013 and second-team in 2014. Cantu was also drafted by Chicago Cubs in the 30th round in 2014.

Cantu has proven himself with his confident play from behind the plate. Cantu said that confidence comes from his trust in himself and his baseball ability.

“You got to be confident,” Cantu said. “I was always told that there’s no age in baseball. It doesn’t matter. If you can play, you can play. That’s the big thing: You got to have confidence and trust yourself and trust that what you’ve been doing that’s got you here will keep you going.”

Although he isn’t shy about his skill, Cantu also is quick to mention his teammates and throw the spotlight off himself.

“I’ve just been trusting myself and having confidence in my teammates,” Cantu said. “I threw a guy out that Joe [Baker] caught [against Oklahoma]. The ball was up the line, and he made a great play on it. It’s just trust in ourselves and trusting our defense.”

Cantu and the Longhorns will try to break out of their slump in a three-game series against Kansas starting Friday at 6 p.m. in Lawrence, Kansas.