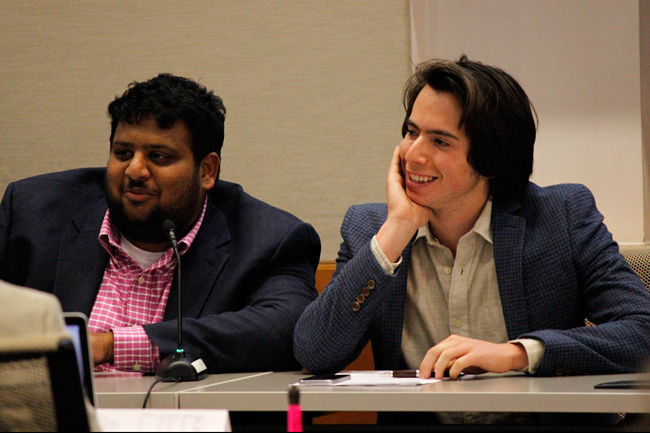 The Student Government president and vice president were elected on a satirical campaign, but they said their new platform is no joke.

After President Xavier Rotnofsky and Vice President Rohit Mandalapu won the executive alliance runoff election in March — an election they did not necessarily expect to win — they came into office with a mostly humorous platform. Now, Rotnofsky, Mandalapu and their executive board are forming more concrete plans and ideas they said they hope to work on during their year-long term.

Some of their initiatives include expanding student eating options on campus, with a focus on extending dining hall hours, adding healthier late-night food choices and increasing kosher and halal food selections.

Mandalapu said they have already received some positive feedback in talking with the administration about their ideas.

“With any platform point that affects a huge amount of students, there’s always going to be issues that come up, in funding and how they can be,” Mandalapu said. “But I think we’ve chosen a list of things that are not only very helpful to the student body at large, but also very doable.”

The team also hopes to increase civic engagement, possibly by implementing a program where resident assistants and desk monitors can become deputized as voter registrars. Rotnofsky said they also want to advocate for student issues in the legislature, including lobbying against campus carry, a bill that would allow students, faculty and staff to carry concealed handguns into campus building.

Taral Patel, newly-named SG chief of staff, said the team does not want to make empty promises with their platform.

“The broader ones are harder, but we want to make sure what we do is very effective, and it’s not just making a statement,” Patel said. “We want to try to do more than that — try to figure out how we can make a bigger impact.”

Other platform points include bus route expansion, making campus more accessible for students with disabilities and increasing recycling options on the Drag and in West Campus. They also said they hope to continue platforms from the past SG administration, such as securing funds for Safe Ride, implementing on-campus tailgating and increasing branding on campus.

Mandalapu said their platform is not set in stone and will likely evolve as the year continues.

“The thing about platforms and how we see them is it’s always evolving,” Mandalapu said. “Things are going to come up; things are going to get shot down. I think we’ve come up with a solid list of things we’re really passionate about.”

Rotnofsky said he plans to maintain the duo’s sense of humor while also being transparent with students.

“While we will be humorous in our outreach to students, we’re also going to be completely honest with ourselves and with the students, and so, if something fails, we’ll say, ‘OK this is why this couldn’t work out,’” Rotnofsky said.

Mandalapu said he and Rotnofsky hope to continue connecting with students the way they did during their campaign.

“I feel like we’re very approachable,” Mandalapu said. “People don’t think that we’re these … mystical figures who run the university. Instead, I think we’re very normal students who happen to be in these roles.”