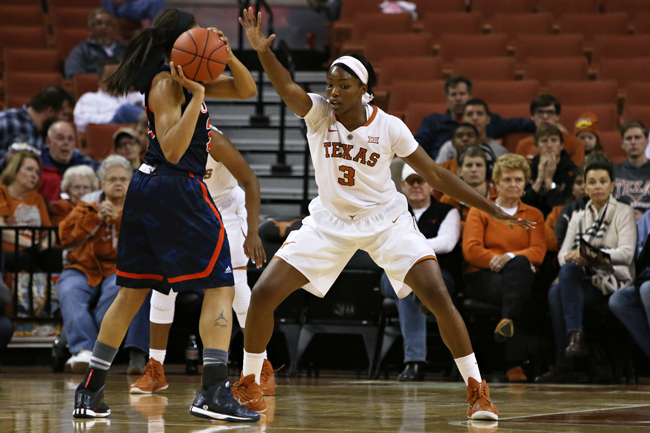 Watching the WNBA Draft, surrounded by her family, senior forward Nneka Enemkpali was finally able to let out a sigh of relief Thursday night.

After months of uncertainty about Enemkpali’s future in basketball, the Seattle Storm drafted the former Texas basketball star as the second pick in the third round of the 2015 WNBA draft, placing her No. 26 overall on the selection board.

“Ever since high school, it has been a dream of mine to play professionally … I’m so excited that it is now a reality,” Enemkpali said. “I can’t wait to bring my competitive fire to Seattle’s organization.”

The Storm drafted Enemkpali though she played in only 17 games this season as a senior. She will sit out the 2015 WNBA season while she recovers from a torn ACL in her left knee she suffered in January.

Despite the injuries, Enemkpali posted high numbers while at Texas. Before her injury this season, she led the Big 12 in rebounds, averaging 10.6 a game and double-doubles with nine. She recorded a Texas basketball record of seven double-doubles — a mark neither LaMarcus Aldridge nor Kevin Durant ever eclipsed. Furthermore, her accomplishments landed her a spot as a Senior CLASS Award Second-Team All-American, in recognition of excellence in the community, classroom, character and competition.

She ranks ninth in Texas’ record books with 899 total rebounds while she finished with 30 total double-doubles. She also ranks 30th all-time in total points with a little more than 1,100. Before her injury, she was on pace to become the fifth Longhorn to reach the 1,000 mark in both points and rebounds in a career.

“I’m incredibly excited and proud of Nneka,” head coach Karen Aston said. “She is a testament to what can happen if you have a consistent work ethic and a commitment to being successful. The Seattle Storm saw the potential in Nneka and trusted that her work ethic will pay off in the long run.”

Enemkpali is the eighth Longhorn drafted in the WNBA and the first since 2010, when Brittainey Raven went to the Atlanta Dream in the third round.

“There is unity and excitement around the future,” said Alisha Valavanis, Seattle Storm president and general manager.

The Storm will look to content for a title run this season but will have to overthrow defending champion Phoenix Mercury. Seattle opens its season June 6 at home against the Los Angeles Sparks.