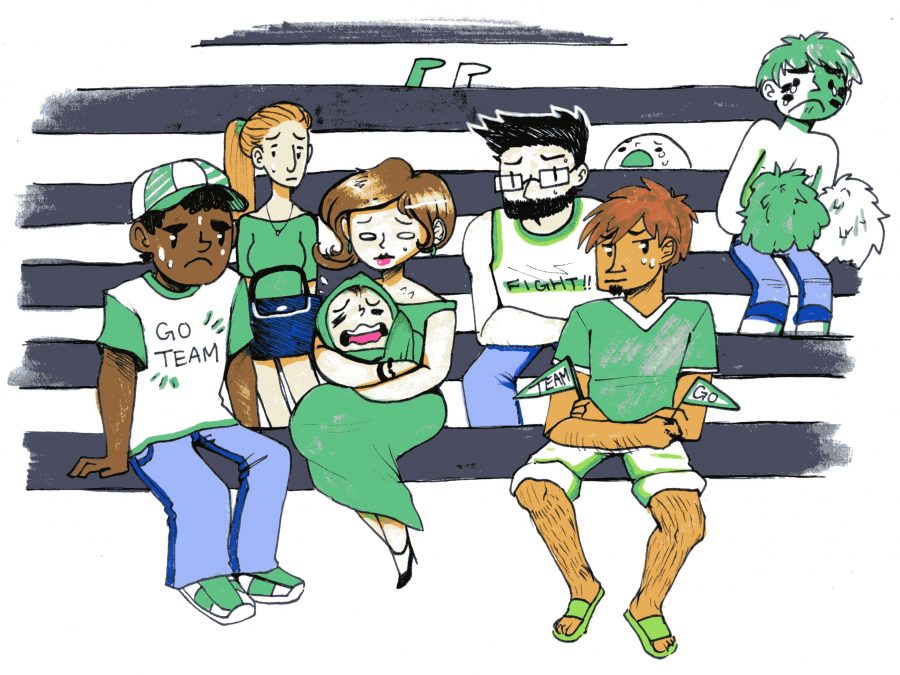 Austin, we have a problem.

Since losing the 2010 BCS Championship to Alabama, the Texas Longhorns football team has been far from great, compiling a record of 36-28 (23-20 in Big 12 play) over the last five seasons. The fans have been worse. They’ve stopped showing up.

It’s not that fans aren’t attending the games. According to the NCAA, Texas had an average home attendance of 98,976 in 2013. Although attendance is slightly down since the days Texas was contending for championships, there are a lot of people in Darrell K. Royal Stadium on Saturdays. It just doesn’t feel like it.

The atmosphere in the stadium is abysmal. When I came to Austin as a freshman in 2012, I expected an electric environment. I saw it once. Against West Virginia in 2012, the stadium was shaking. Texas was undefeated at the time.

But should the fans only be interested when the team is good? Where is our pride in our school? Sadly, the passion of Texas students and fans, when it comes to football, comes and goes with the wins.

This happens for every school to an extent; fans are always craziest when more is at stake. But folks who travel to Knoxville, Tennessee, to see the Tennessee Volunteers will tell you their crowd is wild for every game. They haven’t won more than seven games since the 2007 season.

The Texas crowd should be no different. It should be loud, and it should be difficult for opposing teams to play in Austin. Texans claim it is all about football here, and Texas is the marquee program in this state. Our students and fans need to act like it.

What makes college football unique is the passion of the students. Many Texas students with tickets don’t even attend the games. Lowerclassmen can move forward and fill the voids left by juniors and seniors who don’t attend. The bleachers in the south end zone are still half empty at kickoff. The student section should be rowdy. It should be crazy. It should not be boring. But it is.

To revive this fan base, the Texas Athletic Department needs to take a long, hard look at the gameday events, traditions and festivities on and around campus.

Tailgating is a popular pregame activity and always will be. But where are the events unique to Texas? The Stadium Stampede happens several hours before the games, but there isn’t currently much buzz about it. It isn’t a must-see event for anybody visiting Austin for a game. It’s time to create new traditions and new events that leave visitors clamoring about the gameday experience in Austin, even if they aren’t Texas fans.

Before the game, the city’s abundance of musical talent should be utilized by having live music on and around campus during tailgating hours. After all, people do call Austin the “Live Music Capital of the World.” What about Austin’s many food trucks? Get those near the stadium for gameday. The South Mall is an iconic area of the Texas campus that needs to be incorporated into the experience. They held a Chiddy Bang concert there in 2013 with the stage right in front of the Tower, and it was a great experience.

Here’s my vision of a memorable game day event: a live music or DJ event with the South Mall full of Texas fans in burnt orange including school songs and chants led by someone on stage. This would be something to talk about but only if all the fans, especially students, buy in and get loud.

Instead of the current Stadium Stampede, the Texas band and football team could attend this event two hours before the game to create additional hype for the crowd. The walk to the stadium could run from the symbol of our campus and our school pride (the Tower) straight to the stadium. This is just one idea of an event that could get the Texas football players, campus and the culture of the city more involved in a fan’s gameday experience.

The stadium experience could also use some improvements. The speakers inside the stadium need an upgrade for better music and sound quality. More replays and highlights could be shown to further immerse fans into the game. Although an unpopular idea with the Athletic Department, moving more students closer to the field and into the lower deck would improve the student section. The student section isn’t that great right now, but they’re still the rowdiest group at the game. Many fans want alcohol to be served inside the stadium, especially since Texas games are, in a sense, an NFL equivalent in Austin. These are just a few ways the stadium could be improved for fans.

I hear fans asking for change. But nothing has changed since I came to school here in 2012.  There have been no significant upgrades to gameday inside or outside the stadium. Every year students and fans receive email surveys about how games can be improved. I don’t know if Texas fans just aren’t responding or if the school isn’t listening. Or maybe big changes are currently in the works. What I do know is that entering the 2015 season this fall, it’s time.

Ralph is a mechanical engineering junior from Allen.