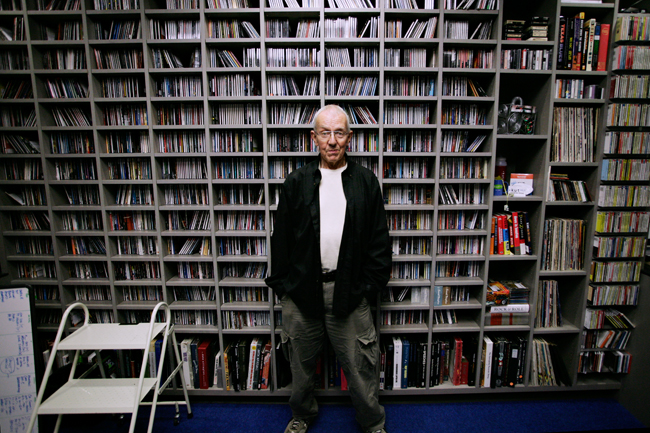 KUT radio host John Aielli owes his lengthy 50-year radio career to a stroke of luck — and to a desperate job search he conducted as a teenager.

In 1963, Aielli had just been accepted into the UT, but the price of room and board proved a roadblock to his enrollment. Aielli deferred his acceptance in order to save up for school and embarked on a job search, finding employment at a local radio station.

Three years later, Aielli was finally enrolled in UT, and he had started work at KUT 90.5 FM. His periodic fill-ins for different hosts turned into a full-time job after graduation. He continued to work his way up the KUT ranks, and he began hosting his own show, Eklektikos, in 1985. In the 30 years he has hosted the show, Aielli has followed the same formula for his show — which is to say, no formula at all.

From 6–9 a.m., Aielli plays a wide variety of songs, accompanied by strange commentary that is more often than not unrelated to the songs he is playing. His strange ramblings inspired the tribute twitter account “Shit John Aielli Says.”

“The show is just something that I love doing,” Aielli said. “Largely, what I do is inform the public about what’s going on in the community. It’s about finding connections and just about being an idiot and provoke people to have a good time.”

After 50 years in radio, Aielli said he’s witnessed a number of changes in the music industry. When he first started Djing. Aielli said classical music often dominated the station, but, one record at a time, different types of music began to gain more airtime.

“Back then, we played a lot of classical, and then it completely changed,” Aielli said. “I remember it was 1963 or ’64, and this guy comes in, hands me this record and tells me to play it right now. It was ‘I Want to Hold Your Hand,’ and I thought it was the most raucous thing I ever heard in my life. Right after that, [The Beatles] became huge.”

Aielli’s radio career gave him the chance to witness global changes beyond the music industry. When Aielli wasn’t DJing, he occasionally reported on current events, including President John F. Kennedy’s assassination and the Vietnam War. Aielli said he remembers the newsroom atmosphere when Kennedy
was assassinated.

“When I started working, John Kennedy was president, and I was on the air when he died,” Aielli said. “We had a newsroom next to us, and it had an AP wire machine, and the bells were going crazy. I’ll never forget that. It was one of the first times I realized just how messed up the world could be.”

His co-workers and listeners know Aielli for his quirky personality. Co-worker Jay Trachtenberg, another UT alumnus, calls Aielli’s eccentricities both lovable and frustrating. Whether noting Aielli’s ritual habit of doing headstands when arriving at the office or observing his aversion to wearing headphones during his show — which at times has resulted in a few minutes of dead air — Trachtenberg said there’s no denying that Aielli is one of a kind.

“Everybody here has John Aielli stories,” Trachtenberg said. “We came from this generation where radio was more of a free-form thing, and John never left that behind. I think at the end of the day, love him or hate him, when he hangs up his spurs, you won’t hear anything like that on the radio again.”

Aielli said even after 50 years of work, he continues to look forward to each new day.

“You never know what’s going to happen,” Aielli said. “I lucked out. I wound up by default doing something that I really, really love. I get to be in the world of music playing records and talking to musicians. I can’t be happier than that.”