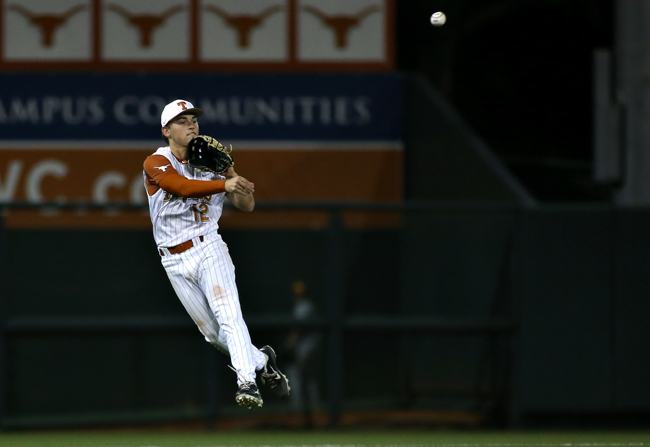 After a three-hit, one-RBI night earlier this month, freshman shortstop Joe Baker found himself in the middle of  his first media scrum, where he was given a surprising nickname.

Despite only recording three RBIs so far in his freshman campaign, he was dubbed “the RBI maker,” a name that, at the time, didn’t quite fit.

“This is a great opportunity,” Baker said. “To be at The University of Texas — it’s an honor to be here. But I like that name.”

Baker, a native of McKinney, lived up to his moniker Sunday against Kansas as he hit his first collegiate home run and finished with a team-high four RBIs.

While he earned his nickname because of his offensive performance, his defense has kept him on the field. Baker has completed numerous highlight plays for outs at shortstop.

Baker made a sliding grab against Wichita State, diving toward third base and making a long throw to first to get the out. The play was even featured on SportsCenter as the No. 6 play of the day.

He has become a successful addition to the Texas starting lineup, and his teammates have taken notice.

“All of these guys are hard workers like Joe,” senior second baseman Brooks Marlow said. “Joe is coming in at a tough spot playing shortstop. Joe is playing so hard right now. He’s getting the job done right now. I’m proud of Joe.”

Before coming to Texas, Baker missed his senior season of high school because of an injury. But during his junior season, he hit .383 with 17 RBIs and 18 stolen bases for the McKinney Lions. Baker was named to the All-District 10-5A second team as a sophomore and a freshman.

Baker’s breakout year comes as the Longhorns struggle to find their way out of a slump. Before defeating Kansas, 16–7, and securing its first three-game series victory since March 22, Texas had lost three-straight weekend series and 11 out of its last 15. He’s currently hitting .262 with 16 hits and 8 RBIs.

“Joe Baker, at shortstop, [is] another bright spot,” head coach Augie Garrido said. “Some great plays by Baker. There are individual performances that are really good. We have good players, but they’re not able to extend the rallies.”

Texas (20–18, 8–7 Big 12) hopes its series win against Kansas can fuel a late-season rally. The Longhorns also hope Baker continues to live up to his nickname and keep up his defensive performance when they take on Texas State on Tuesday.

“We have to pick each other up,” Baker said. “No matter what coach says where to go, we just do our job.”

Texas beat the Bobcats, 6–4, in their first meeting in San Marcos on March 24. First pitch is scheduled for 6 p.m. Tuesday  at UFCU Disch-Falk Field.