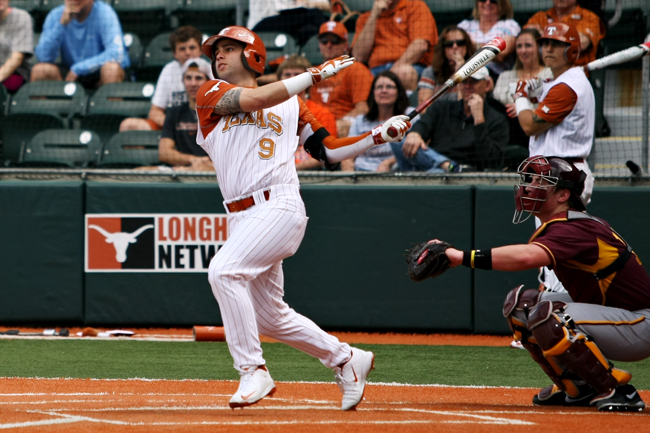 For almost a month, the Longhorns struggled to piece together key hits and big run-scoring innings. They had only one three-run inning in their last 12 games and failed to score more than four runs in all but one game in that span.

This Sunday, those struggles all came to an end.

Texas’ bats woke up in a big way, and the team took its first series victory since late March. Texas batters pounded out 23 hits, five home runs and went 8-for-16 with runners in scoring position in a 16–7 win Sunday over Kansas to take the series.

“It puts us right in the running and keeps us in the race,” head coach Augie Garrido said.

Junior shortstop C.J Hinojosa, who came into the series in a bad funk, found himself at the center of the re-emergence of the Longhorns offense. He kicked off the scoring with an RBI double to left in the third inning and then scored himself on a double by freshman first baseman Michael Cantu a short while later.

Two innings later, Hinojosa came through again with a runner on base, lining a triple to the gap in right-center field and scoring senior right fielder Collin Shaw. Hinojosa’s shot came as part of a seven-run fifth inning, all of which came with two outs. It was the most runs Texas had scored in an inning since their home opener on Feb. 17.

Hinojosa capped his day off with a two-run shot over the wall in left field to complete the cycle — the first Longhorn since Kyle Russell in 2007 to do so.

Junior left fielder Ben Johnson came through in a major way as well, drilling two home runs to left, knocking in three runs and coming up a triple shy of the cycle himself. Freshman designated hitter Joe Baker hit a two-run shot of his own had four RBIs.

“We make a lot of fly ball outs, so when that wind [was blowing] out today, our batters’ eyes got about as big as silver dollars,” Garrido said. “They were very excited about knowing that their fly balls were going to make it over the warning track and over the fence.”

Before Sunday’s offensive spark, the Longhorns nearly fell victim to another late-game disappointment Friday night. With the game tied at two in the bottom of the 11th, Kansas opened the frame with a walk and a single and then loaded the bases after a sacrifice bunt and an intentional walk. But senior pitcher Ty Marlow got the next batter to hit into a double play to end the threat.

Three innings later, Johnson legged out an infield single to give Texas its first extra-inning win since March 13. But Kansas got its revenge Saturday night with a walk-off home run in the ninth to set up the rubber match Sunday.

The series win pulled Texas back up above .500 in conference play and moves the Longhorns to two-and-a-half games back of Oklahoma for first place in the conference.