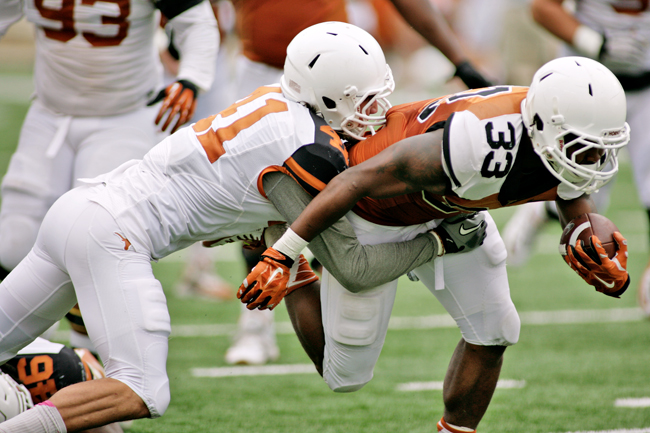 With a battered offense, Texas’ bright spot in 2014 was its defense — and if Saturday’s Orange-White game is any indication, the defense can still hold its own.

During the spring scrimmage, the Longhorns’ defense, which ranked No. 25 in total defense in 2014, showed potential in its first time on display since spring practice started.

Junior safety Dylan Haines said earlier in the week that turnovers were a focus this off-season, and the improvement in that regard was on display Saturday. The second-team unit forced two turnovers while also adding five sacks and seven tackles for loss, ultimately only giving up one touchdown.

“I feel like we’re in a good place,” junior defensive end Hassan Ridgeway said. “I feel like with all of the injuries, we’ve showed that we can come through, and we can still go out there and play.”

Much like last season, the defensive line excelled in containing the run and generating a pass rush. Head coach Charlie Strong pointed to senior Shiro Davis, sophomore Poona Ford and Ridgeway as standouts on the defensive line, but he said he was especially impressed with junior Bryce Cottrell, who picked up a sack and two tackles for loss.

“You talk about Bryce [Cottrell], he is faster; he is someone that’s coming on that we’re going to need to come on for us,” Strong said.

Behind the defensive line, the linebacker corps also succeeded despite only having four healthy linebackers on scholarship. Junior Timothy Cole topped off his strong spring, leading the unit with seven total tackles and two sacks, while senior Peter Jinkens made six tackles of his own. Freshman linebacker Malik Jefferson also shined with a few big hits and a forced fumble, which redshirt freshman linebacker Edwin Freeman returned for a touchdown.

“[Jefferson] is always seeing and making plays,” Ridgeway said. “He may not do exactly it the right way, but he’s going to be there to make the play.”

Like the linebackers, the secondary was thin, with three cornerbacks held out with injuries. Junior cornerback Bryson Echols and redshirt freshman cornerback John Bonney benefited most from increased playing time, as Echols grabbed an interception, and Bonney impressed fans with two crushing hits.

The secondary still saw continuity with both Haines and sophomore safety Jason Hall getting starting nods. Hall particularly impressed with solid coverage, including a pass breakup that almost went the other way for 6.

“I expect [Hall] to really develop and come into his own and really stand up and become a leader back here and especially in the back end,” Strong said. “As big and strong as he is, we need him to play like that all the time.”

Although they showed potential Saturday, the Longhorns are still riddled with injuries. With three starters returning from injury among several other contributors, competition will be deep in the summer.