‘Unfriended’ makes the most of internet-focused premise 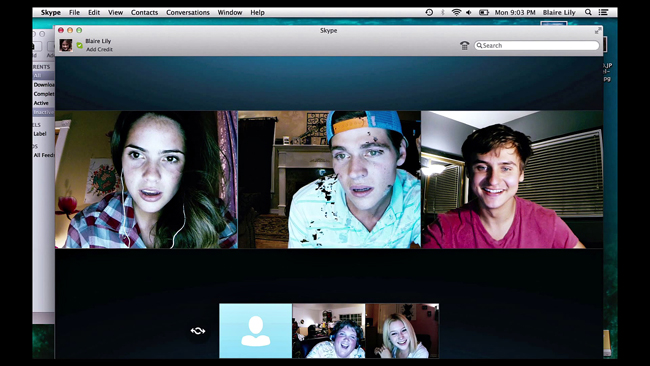 Ghosts have leveled up from haunting houses to haunting the internet in “Unfriended,” a found-footage horror film set entirely on one computer screen. The story revolves around a group of friends’ interactions on Google, iMessage, Skype and Facebook as they talk to each other even while being tormented by a ghost. The concept of cyber-haunting and the webcam gimmick sound dumb, but “Unfriended” takes advantage of its central premise with surprising cleverness.

The film opens with the main character, Blair (Shelley Hennig), watching the suicide video of her deceased cyber-bullied classmate, Laura Barns (Heather Sossaman). Blair’s boyfriend, Mitch (Moses Jacob Storm), calls her on Skype, and the rest of their friends soon join them.

When a mysterious seventh person joins the call using Laura’s account, the friends assume the mystery user is a glitch or an internet troll. When the stranger threatens to kill them if they leave the call and begins to reveal how they have secretly sabotaged each others’ lives, the teens realize the entity is Laura’s vengeful spirit. One by one, Laura attempts to brutally murder each friend as their relationships with each other crumble apart.

“Unfriended” demonstrates a striking understanding of how modern audiences actually use the Internet. Even as she’s Skyping her friends, Blair simultaneously sends messages, chooses new songs to play on Spotify and browses Facebook. It isn’t distracting — it’s realistic.

Director Levan Gabriadze and screenwriter Nelson Greaves exploit audiences’ familiarity with the online world by twisting the familiar and innocuous sounds of Facebook notifications and incoming Skype calls. Under their direction and script, the sounds become malevolent alarms.

The film starts off slow, but once it gains momentum, it develops into a roller coaster ride fraught with thrills and jump scares. The actors do an excellent job arguing, screaming and crying as Laura’s revenge unfolds. It’s unfortunate that Gabriadze poorly presents the characters’ deaths. Their webcam feeds glitch and freeze during those scenes, making it hard to understand what is going on.

The script also has its fair share of purely humorous moments. The characters act like real teens, teasing one another and making dirty comments. Laura occasionally takes control of Blair’s Spotify account and plays happy-go-lucky tunes with titles and lyrics that ostensibly match the events on screen but clash with the horror that is actually unfolding. Some of the friends’ arguments draw a few laughs, too.

“Unfriended” suggests that the line between the bullies and the bullied is blurrier than it seems. All the characters appear to be genuinely nice at the start of the movie. Eventually, Laura shatters the audience’s perception of each character by charging them with various acts of lies and deceit. Each teen is equally a victim and a perpetrator of bullying. “Unfriended” illustrates the idea that anyone can bully someone else and asks people to consider how their actions affect others. Some parts of “Unfriended” don’t work. Blair relies heavily on a sketchy website’s instructions for how to interact with angry ghosts, rendering her just another dumb teen in a long line of dumb teens in horror movies. Whenever the characters try to flee Laura, they have to take their laptops so their webcams can stay on their frightened faces. It’s an unwelcome reminder that we’re watching a movie, and these people aren’t real.

“Unfriended” provides some effective scares and thoughtful social commentary throughout its brisk 82-minute runtime. It’s an innovative take on the found-footage genre worth watching. After it’s over, the ring of a Skype call might make chills run down your spine.