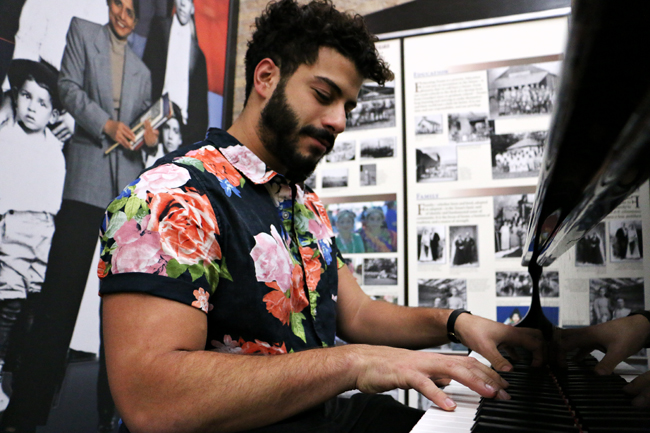 “I just hear music like a crazy person,” Sahad said. “There’s music all around me. It’s kind of like madness.”

Although he can’t read music, Sahad can translate what he hears into music with his weapon of choice — the piano.

Aside from the few piano lessons he took as a kid, Sahad’s experience with music is largely self-taught. During his freshman year of college, he spent his free time teaching himself to play the piano at dorms on campus. Now, over three years later, he’s preparing to release his first full-length album, Love & War, at the end of May.

“I was playing [piano] because college is hard,” Sahad said. “It helped me calm down. It helped me feel. With so many things going on, it was a way for me to slow down.”

During the summer after his sophomore year, Sahad began recording original songs and worked as an intern at Capitol Records in Los Angeles. He spent the days organizing calendars for artists such as Emeli Sandé and Coldplay and spent the nights writing his own music. After recording his first song, “Cream,” in his closet in LA, he showed it to his best friend and video producer Dustin Ratheal.

“It was just a keyboard and him,” Ratheal said. “It wasn’t something that was supposed to be good, and it was great.”

A few months later, he began putting together the album of 11 songs. He goes by the artist name Naji Rose — his parents’ first names.

“I am first generation Dominican-American, so my parents both grew up in the Dominican Republic,” Sahad said. “They’re both doctors. They worked to get here, and that’s definitely the reason I work — to merit their sacrifices.”

In January, Sahad began working with InfiniD Music, a student-run music label that has helped him produce the album. Dashon Moore, music production sophomore and founder of InfiniD Music, said he sees influences of artists such as Alt-J and Macklemore in Sahad’s work.

“[Sahad] is one of the best singers that I’ve ever heard,” Moore said. “Even after hearing one of his songs once, I can hear myself singing it in the shower. It just gets stuck in my head.”

Sahad has not released any of his music online. He said he only wants to share his music once it is
completely finished.

“I was never the kind of guy who posted videos of myself playing piano or progress,” Sahad said. “I only showed people I could play my music whenever I thought it was good enough.”

During spring break in 2014, however, Sahad decided to gauge how people would react to his songs. With the help of Ratheal, he created a minute-and-a-half-long video of himself singing “Cream” and posted it to Facebook for 24 hours.

But Sahad says it’s not fame he’s after. He just wants to make music. After college, Sahad said he wants to go to production school and open a publishing firm or record label. His ultimate goal, however, is to help with education reform in the Dominican Republic, where most of his extended family still lives.

“I don’t want to be the guy on stage because that’s a difficult life,” Sahad said. “It sounds glamorous, but it’s hard. I don’t want so much attention around me. I just want to do what I love.”